Perspectives: The 13 US Service Members Killed in Kabul

Many voices across the spectrum, especially on the right, highlighted the fallen service members, their backgrounds, what they left behind, how their death impacted their communities back home, and how Americans were moving to honor them. Most highlighted how young most of the fallen were, and often contrasted that with the 20 years of U.S. military involvement in Afghanistan. Some on the left focused more on the two female Marine sergeants; some on the right profiled the service members while also blaming President Joe Biden for their deaths. 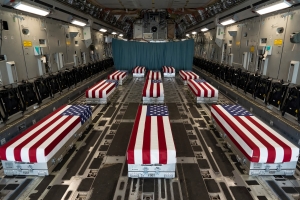 Our 13 young military fallen deserved better, but they died with honor and give us faith in their noble generation, which has had to shoulder the burden of its feckless elders. A war that began when most of them were babies ended in disgrace when they were killed along with nearly 200 Afghans in last week’s suicide attack at Kabul airport during a withdrawal that could not have been more botched.

As President Biden attended Dover Air Force Base Sunday for the “dignified transfer” of the remains of these first US troops killed in Afghanistan in 18 months,... 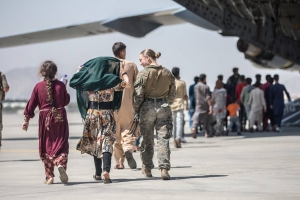 Eleven Marines, one Navy corpsman and one soldier were “killed as the result of an enemy attack while supporting non-combatant evacuation operations,” according to a Saturday press release from the Department of Defense, which released the names of the U.S. troops.

The names were released 24 hours after families of the deceased were notified.

For the Marine Corps, the deceased are: 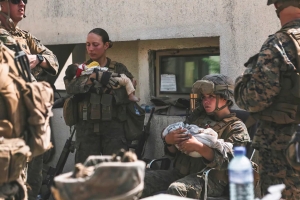 They had signed up to do their part, to heal a country — their own — that had not known a moment of peace in their entire lives. Rylee McCollum wanted to become a history teacher, but only after doing what he could as a Marine to serve his country. Hunter Lopez knew this was what he wanted since he was 11 years old. Ryan Knauss knew it in second grade.

The 13 American service members killed in Kabul on Thursday died in gruesome violence, victims of a terrorist bombing....

Read full story
Some content from this outlet may be limited or behind a paywall.
See full media bias rating for Washington Post
More Stories »
US Military, Afghanistan, Kabul, Middle East, Defense And Security
Go ad-free! Support AllSides.
About these ads