House Speaker Nancy Pelosi announced Thursday that she would establish a select committee to investigate the January 6th Capitol riot, four weeks after Senate Republicans blocked the creation of an independent bipartisan commission. “The select committee will investigate and report on the facts and the causes of the attack and it will report recommendations for the prevention of any future attack,” Pelosi said. Following reports that Pelosi was considering a select committee, House Minority Leader Kevin McCarthy said Wednesday that he was sure the committee would be political “because that's the whole way that she's handled it.”

See Today’s News »   More Headline Roundups »
From the Left
306
US House
Pelosi says she will create a select committee to investigate the Jan. 6 assault on the U.S. Capitol.
New York Times (News) 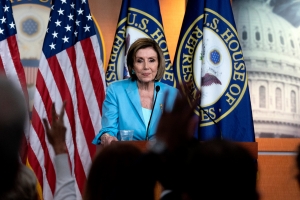 Speaker Nancy Pelosi announced on Thursday that she would create a select committee to further investigate the deadly Jan. 6 attack on the Capitol, after Senate Republicans blocked a bipartisan effort to form an independent commission of experts to look into the riot.

“Jan. 6 was a day of darkness for our country,” Ms. Pelosi told reporters. “Our temple of democracy was attacked by insurrectionists.”

The move came after Ms. Pelosi had signaled for weeks that she planned to take such a step to scrutinize the storming of the Capitol...

Read full story
Some content from this outlet may be limited or behind a paywall.
See full media bias rating for New York Times (News)
From the Right
306
US House
Pelosi creates select committee to investigate Jan. 6 riot, says 'Republicans are afraid of the truth'
Fox News (Online News) 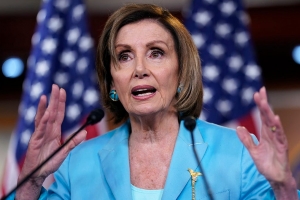 House Speaker Nancy Pelosi on Thursday announced the creation of a select House committee to investigate the Jan. 6 Capitol riot following the failure last month of a bipartisan effort to form an independent commission in the Senate.

Pelosi said she hoped the 9/11-style commission would become a reality, but after Senate Republicans blocked its creation, she could not wait any longer to launch a deeper dive into the events surrounding the takeover of the Capitol. She created a House committee to investigate the origins of the attack and make recommendations on how to prevent... 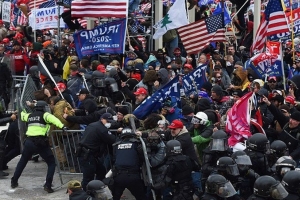 Democratic House Speaker Nancy Pelosi has announced the creation of a committee to investigate the Capitol Hill riot in January this year.

Mrs Pelosi said the Democratic-led committee would aim to "establish the truth of that day and ensure that an attack of that kind cannot happen".

The move comes after Senate Republicans blocked a bill to establish a bipartisan commission into the attack.

Allies of former President Donald Trump said a commission was not necessary.

His supporters stormed Congress in Washington DC on 6 January in a failed bid...

More news about US House

Democrats are launching their investigation into the Jan. 6 Capitol insurrection Tuesday with a focus on the law enforcement officers who were...

‘Deadly serious’: Pelosi goes to war with GOP over Jan. 6

Nancy Pelosi has some unfinished business with Donald Trump. The volatile former president and Pelosi foe is long gone from the White House but still haunts...

Speaker is locked in a battle of wills with Kevin McCarthy who is determined to change the political conversation, critics say It was, Nancy Pelosi...

House Democratic leaders failed to round up enough votes Friday to pass legislation extending the federal ban on evictions just two days before it is set to...

‘You held the line’: Police heroism in spotlight at Jan. 6 hearing

Can the U.S. rediscover a commitment to the truth? That’s what four police officers – who were beaten, repeatedly shocked, and crushed as they defended the...

“The House committee investigating the Jan. 6 Capitol insurrection held its first public hearing Tuesday, vowing to get to the bottom of the attack...

As Congress launches new Jan. 6 inquiry, a push for the truth

Is it possible to get to the bottom of an intensely political event without being political? More than six months after rioters disrupted Congress’...

Rep. Alexandria Ocasio-Cortez and members of “The Squad” erupted in celebration when the Centers for Disease Control and Prevention announced a 60-day...

The anti-Trump January 6 circus is underway and yesterday did not disappoint. The Democrats called up police officers to testify. Nice move since who will...