President Obama stated tonight in his DNC address, that no man or woman has even been more prepared to lead the U.S. than Hillary Clinton.

From the Left
1301
Democratic Party
Obama on Clinton: 'There has never been a man or a woman ... more qualified' to be President
Washington Post 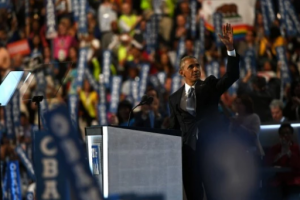 President Barack Obama Addressed the Democratic Party's convention for the final time as the Oval Office householder, reflecting on his presidency and preparing to vouch for the woman he hopes will be his successor, Hillary Clinton. 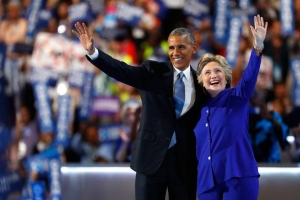 President Barack Obama, with the end of his own presidency in sight, vouched for Hillary Clinton in an optimistic speech Wednesday intended to rebut Republican criticism of her record as secretary of state and elevate her as a tested leader at a time when national security is taking a central role in the presidential campaign.

President Obama and Tim Kaine tag-teamed to deliver a scorching warm-up Wednesday for Hillary Clinton to accept the party’s nomination for president at the Democratic convention, with the president accusing Republican Donald Trump of only offering “slogans” and “fear” – and Clinton’s newly tapped running mate almost upstaging the commander-in-chief with his gusty impression of the billionaire’s New Yawk bravado.

Joe Biden spent lots of time talking about unity and bipartisanship in Washington over the last two months. But at the moment there’s a more urgent imperative...

Democrats wrestle with how to quit an acquitted Trump
ANALYSIS

Donald Trump was just acquitted for a second time. Now the real question is, can Democrats finally quit the former president? Democrats have spent five...

Democrats, Under Union Pressure on Reopening Schools, Must Choose Teachers or Parents

Democrats are facing increasing pressure from parents to reintroduce in-person teaching while education unions resist party leaders' efforts to get pupils back...

President Biden told Senate Democrats at a virtual lunch on Tuesday that Republicans' current $618 billion coronavirus relief proposal is "too small," but he...

Democrats spent much of the last four years debating exactly how they lost to a fairly unpopular and flawed candidate like Donald Trump in 2016 and what...

Democrats Ask Biden To Give Up Sole Authority On Nuclear Launches

A group of more than 30 House Democrats has asked President Joe Biden to cede his sole authority to launch nuclear weapons. In a letter penned by Rep. Jimmy...

New York Gov. Andrew Cuomo is denying allegations this week that he has used his position to belittle and bully critics and opponents, sexually harass an aide...

Democrats are growing concerned over the White House’s plans to overhaul the Trump administration’s policies on immigration. Politico reported that...