The Obama administration allegedly gave Iran a license to access the U.S. financial system after striking the nuclear deal, despite public officials' promises that this wouldn't happen, according to a new report by Senate Republicans. The plan never came to fruition, as two U.S. banks would not participate. 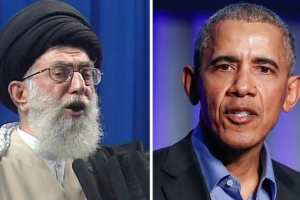 The Obama administration granted a license letting Iran access the United States financial system despite officials’ pledges that they would prohibit it, according to a draft report from the Senate’s Permanent Subcommittee on Investigations.

“The Obama administration misled the American people and Congress because they were desperate to get a deal with Iran,” said one senator.

After striking an elusive nuclear deal with Iran, the Obama administration found itself in a quandary in early 2016: Iran had been promised access to its long-frozen overseas reserves, including $5.7 billion stuck in an Omani bank.

Police in the Iranian capital, Tehran, have denied using live ammunition against protesters outraged by the shooting down of a Ukrainian airliner. Officers...

Amid growing protests and anger in the streets of Iran, President Trump on Sunday delivered a blunt warning to the government in Tehran. “To the leaders of...