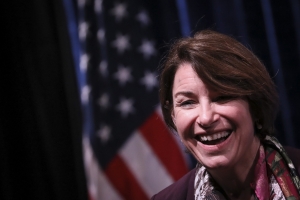 The New York Times has created a spectacle around one of the stodgiest features of presidential primary season: The newspaper endorsement. In years past, the Times had simply splashed the name of the chosen one across its editorial page a week or so before the Iowa Caucuses, with a few bromides about “experience” and “temperament.” In the last two competitive Democratic primaries, the Times endorsed the establishment favorite Hillary Clinton, revealing both the Times’s own establishment leanings and the depths of its influence on actual voters.

This cycle, the Times...

The New York Times editorial board on Sunday night endorsed both Sens. Elizabeth Warren (D-Mass.) and Amy Klobuchar (D-Minn.) for the Democratic nomination for president.

The dual endorsement, a break in convention for the Times, comes just two weeks before the first primary contests in Iowa and New Hampshire, where Warren has remained a top contender while Klobuchar has struggled to break out of single-digit support.

"In a break with convention, the editorial board has chosen to endorse two separate Democratic candidates for president," reads the Times's endorsement.

The New York Times editorial board announced Sunday evening that it would endorse two candidates for president for the first time in the newspaper’s history: Senators Elizabeth Warren of Massachusetts and Amy Klobuchar of Minnesota received the paper’s support.

The Times’s editorial board interviewed nine of the top candidates last month for in-depth interviews and documented the process of how they settled on the double endorsement in the paper’s documentary show “The Weekly” on FX.

The mayor of tiny Burlington, Vt., was back from Nicaragua and eager to share the good news. The country’s Soviet-backed government — forged via armed...

On Saturday, Bernie Sanders won the Nevada Democratic caucus. As of Sunday night, Sanders led with 47% of the vote; Joe Biden was second with 21% and Pete...

Rival candidates have just a week to stop Sen. Bernie Sanders if they hope to prevent the Independent from Vermont from taking the party’s presidential...

Former Vice President Joe Biden has always been gaffe-prone, but he was on a roll in South Carolina on Monday. Just days before South Carolina voters will...