On Friday, the City of New York Police Benevolent Association (NYCPBA) endorsed President Donald Trump for re-election in 2020 at an event hosted at Trump's New Jersey golf course. On the same day, the United States Postal Service (USPS) workers' union, National Association of Letter Carriers (NALC), endorsed former vice president Joe Biden in a letter. While the NALC endorsed Hilary Clinton for president during the 2016 elections, PBA President Pat Lynch said at Trump's event, “I cannot remember when we’ve ever endorsed for the president of the United States until now — that’s how important this is.” 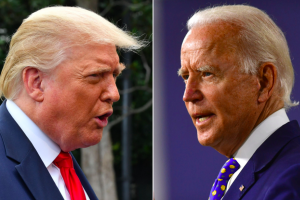 "Biden and Harris fully exhibit the experience, dedication, thoughtfulness and steady hands that will work to ensure that letter carriers and working families are put first ... The Postal Service must not be allowed to fail," said a letter from the National Association of Letter Carriers, which represents the 300,000...

BEDMINSTER, N.J. (AP) — Seeking to amplify his law-and-order message, President Donald Trump on Friday told hundreds of New York Police Department officers that “no one will be safe in Biden’s America” if the former Democratic vice president defeats him in November .

“This guy has been taking your dignity away and your respect,”″ Trump said of former Vice President Joe Biden. “And I’m telling you on Nov. 3 you’re going to be getting it back.”

Trump spoke to members of the City of New York Police Benevolent Association, the...

The New York City Police Benevolent Association personally endorsed President Trump on Friday night for the next election as the commander in chief leans into his “law and order” platform.

The Post exclusively reported earlier Friday that the PBA planned to back him amid the city’s increase in crime and clashes with protesters.

“I cannot remember when we’ve ever endorsed for the president of the United States until now — that’s how important this is,” said Pat Lynch, the combative PBA president at an event with Trump in his Bedminster...

Standing in front of thousands of unmasked supporters packed together on an airport tarmac here Saturday night, President Trump gave his regularly rosy...

With Warnings Of Socialism, Trump Seeks To Boost Support Among Young Florida Latinos

Miguel Arango had just turned 18 when he voted for Barack Obama in 2012. Four years later, he was a passionate supporter of Bernie Sanders, but opted for a...

Will Supreme Court fight help or hurt Trump with women? Likely both.

President Trump may get a lift among some conservative women uneasy with his personal style – but could also lose abortion-rights supporters who voted for him...

Liberals need to sleep in the bed they've made
OPINION

So this is it, huh? I must say, the end of American democracy feels strangely like whatever stage in its terminal decline we were in just before. Look at the...