The top military official in the United States, Joseph Dunford, has announced he will not carry out Trump's ban on transgender troops as directed on the president's Twitter. According to Dunford, there will be "no modifications to current policy" until official guidance has been given to the Secretary of Defense and proper implementation procedures put in place.

From the Left
2425
US Military
Joint Chiefs: We Won’t Implement a Trans Ban Until Trump Tells Us What His Tweets Mean
Slate 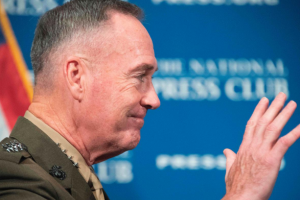 On Thursday, Chairman of the Joint Chiefs of Staff General Joseph Dunford informed the military that the Pentagon would not implement a ban on transgender troops “until the President's direction has been received by the Secretary of Defense and the Secretary has issued implementation guidance.” Until that point, Dunford wrote, there “will be no modifications to the current policy,” and “we will continue to treat all of our personnel with respect.”

The United States' top general told the military on Thursday there had been no change yet to Pentagon policy on transgender personnel, after President Donald Trump's announcement of his plans to ban them appeared to catch senior officers by surprise.

The Department of Defense declared Thursday there will be “no modifications to the current policy” on transgender service members for now, a day after President Trump issued a surprise three-tweet directive banning those troops from the military.

Acting Secretary of the Navy Thomas Modly resigned Tuesday after facing backlash for calling the ousted captain of a coronavirus-stricken aircraft carrier “...

Captain Crozier Is a Hero
OPINION

On Monday, Capt. Brett Crozier, the commander of the aircraft carrier Theodore Roosevelt, sent a letter to the Navy pleading for permission to unload his crew...

The Pentagon has identified two US Marines who were killed in Iraq on Sunday in what is being called one of the "most intense" battles US forces have been...

For the better part of the last decade, the US Defense Department's F-35 Joint Strike Fighter program has epitomized government waste and dysfunction. A report...

Trump Says U.S. Is Ready for War. Not All His Troops Are So Sure.

Between the killing of Iran’s most important general and Iran’s missiles hurtling toward American troops in Iraq, President Donald Trump took time to discuss...

“The captain of a U.S. Navy aircraft carrier facing a growing outbreak of the coronavirus on his ship was fired by Navy leaders who said he created a panic by...

The Flip Side
US Military

‘It Doesn’t Add Up To Me’: Current and Former Navy Officials Question Captain’s Abrupt Dismissal

Acting U.S. Navy Secretary Thomas Modly’s dismissal of a beloved captain who raised concerns about the health of sailors aboard the aircraft carrier Theodore...

Defense One
US Military

The removal of Captain Brett Crozier from command of the 5,000-person vessel, which was first reported by Reuters, was announced by acting U.S. Navy Secretary...

Pentagon workers say that despite Defense Department warnings for non-essential personnel to stay home during the coronavirus pandemic, mundane bureaucratic...

Defense One
US Military

The Navy Captain and the Coronavirus
OPINION

Social distancing is a luxury you don’t have aboard a nuclear-powered aircraft carrier. So a word about Thursday’s firing of a Navy officer who showed up in...

With 'no military solution' in sight, U.S. forced to talk peace with Taliban despite...

America has exhausted all of its military options in Afghanistan and is left with little choice but to forge ahead in peace talks with the Taliban, Pakistani...

America Has A Samson Problem
OPINION

Critics of the Soleimani assassination point out that it was an action devoid of strategic purpose. They are correct to do so. Yet let’s not blame Donald Trump...