Newsweek fired reporter Jessica Kwong after publishing a story about President Donald Trump spending Thanksgiving day 'tweeting' and 'golfing.' Kwong later deflected some of the blame to her editor, who she claims failed to update the story after news broke that President Trump surprised troops in Afghanistan. Trump and other Republicans responded with criticisms of Newsweek via Twitter. 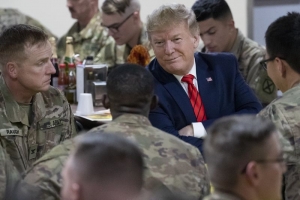 A reporter was fired over her story that incorrectly claimed President Trump spent Thanksgiving golfing and tweeting — even though she says she was assigned the story in advance and her editor failed to rework it after the president made an unannounced secret trip to Afghanistan.

Jessica Kwong was terminated by Newsweek after Trump and Donald Trump Jr. mocked the botched story on Twitter.

“The story has been corrected, and the journalist responsible has been terminated,” a Newsweek spokesperson told the Washington Examiner.

Newsweek said Saturday that the magazine had fired a writer assigned to cover President Trump and his family after the reporter wrote an article about the president's Thanksgiving plans that did not initially include his trip to Afghanistan to meet with U.S. service members.

The magazine told the Washington Examiner in a statement that reporter Jessica Kwong was fired after the magazine's editors investigated "the failures that led to the publication of the inaccurate report that President Trump spent Thanksgiving tweeting and golfing rather than visiting troops in Afghanistan."...

The Newsweek reporter who was fired after writing an inaccurate article about President Trump's Thanksgiving Day plans is deflecting some of the blame onto her editor.

Newsweek initially published the article Thursday morning, before the president's trip to Afghanistan was announced publicly. The story's initial headline was, “How is Trump spending Thanksgiving? Tweeting, golfing and more.”

Associated Press
Media Bias
Fake Trump video? How to spot deepfakes on Facebook and YouTube ahead of the presidential election