This weekend, the nation remembered the lives of civil rights leaders Rep. John Lewis (D-Ga.) and C. T. Vivian, who both passed on Friday. Lewis was a civil rights activist who led nonviolent protests in the 1960s; most notably, Lewis led a march in Alabama that was halted by police brutality in 1965, now known as "Bloody Sunday." Lewis went onto serve over three decades in Congress; he was 80. Vivian, a Baptist minister and aide to Martin Luther King, Jr. was also bloodied on the front lines of the 1960s civil rights movement; he was 95.

Coverage from left- and center-rated outlets highlighted their lives and accomplishments; voices from the left also connected the civil rights movement they fought for with the Black Lives Matter movement occurring today. Coverage from right-rated outlets generally focused more on the White House's response, its order to have the flags lowered to half-mast, and speculation that Lewis might lie in state at the Capitol, an honor reserved for American heroes occurring just 36 times in U.S. history, though there is no official confirmation as of Saturday. 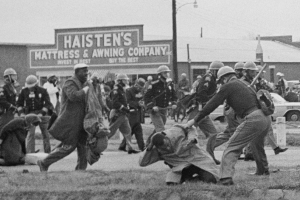 SELMA, Ala. (AP) — John Lewis saw the line of Alabama state troopers a few hundred yards away as he led hundreds of marchers to the apex of the Edmund Pettus Bridge in Selma on March 7, 1965. Armed with gas canisters and nightsticks, the troopers were flanked by horse-riding members of the sheriff’s posse. A crowd of whites milled around nearby.

Lewis, who died Friday at age 80, was just 25 at the time. He had been leading voting rights demonstrations for months in the notoriously racist town, and...

Sometimes I wonder if history is trying to tell us something.

July 17, for example. In the morning came news of the death of C.T. Vivian. At night, the news that Rep. John R. Lewis (D-Ga.) passed away. Two men linked by decades of struggle, success and the deep truth that struggle itself is a kind of success. They met long ago, in the days of tiny television sets and black ribbon neckties and automobiles with fins stamped from sheet metal.

Around 1960, Vivian and Lewis were students together in...

Read full story
Some content from this outlet may be limited or behind a paywall.
See full media bias rating for Washington Post
From the Right
313
Civil Rights
Trump, Pelosi order flags at half-staff to honor John Lewis; possible he could lie in state
Fox News (Online News)

Flags at the White House and U.S. Capitol were lowered to half staff Saturday morning to honor the late Rep. John Lewis, who died Friday night at the age of 80 and President Trump ordered all American flags to be lowered nationwide for the rest of the day.

The tribute to signify a nation in mourning is the first of what is expected to be many ways the civil rights leader and longtime congressman from Georgia will be eulogized.It's possible Lewis will lie in state at the Capitol, an honor...

As the House of Representatives prepares to vote on the Equality Act today, which offers much needed legislative protections for the LGBTQ+ community,...

Black civil-rights activists—and especially Black women—delivered on the promise of the Founding. Their victories are in peril. I. To My Mother you were...

The U.S. Department of Education’s Office for Civil Rights has spent months failing to make meaningful progress on urgent complaints of education...

Hong Kong police on Sunday detained 47 pro-democracy activists on charges of conspiracy to commit subversion under the city’s national security law. The...

Can Black History Month live up to its founder’s vision?

Confining the study of Black history to February, our commentator argues, leads Americans to misunderstand their past – and present. When it comes to history,...

Martin Luther King Jr.'s words of unity and truth transcend how they are often twisted

More than half a century after an assassin's bullet silenced him, and 35 years after the nation began observing a federal holiday in his honor, Martin Luther...

Louisville and beyond: Calls for reform on ‘no-knock’ police raids

The combination of more invasive policing and more armed civilians has created a kind of crisis instability. This story takes a closer look at the consequences...

Free assembly vs. public safety: US mayors making it work

Long months of civil disorder belie progress some U.S. mayors are making on reforms demanded by protesters and in best practices for dealing with the protests...

“Are you now, or have you ever been a member of the Communist Party?” That question brought dread and fear to countless Americans during the dark days of the “...

President Biden's pick to head up the Justice Department's Civil Rights Division is set to face a contentious nomination in the U.S. Senate. The nominee,...

A viral tweet from Charlie Kirk claimed that under President Joe Biden’s coronavirus vaccination distribution plan, “terrorists in Guantanamo Bay would be...

BLM's anti-police rallying cry was the dumbest, most self-destructive slogan in American politics in a very long time. Black Lives Matter came up with the...