Chairman of the Joint Chiefs of Staff Gen. Mark Milley said Wednesday that China’s recent successful test of a hypersonic missile was “very close” to a “sputnik moment” in an interview with Bloomberg Television’s David Rubinstein. "I don’t know if it’s quite a Sputnik moment, but I think it’s very close to that. It has all of our attention," Milley said. The missile tested by China could be armed with a nuclear weapon and would potentially be able to evade American missile defense systems. Other commentators have disagreed over the past week on whether the missile test was or was not a “Sputnik moment.” While the U.S., Russia, and other countries already have working hypersonic missile programs, Raytheon CEO Gregory Hayes said the U.S. was “years behind” China’s hypersonic capabilities. China’s Ministry of Foreign Affairs said earlier this month that the test, which reportedly “caught U.S. intelligence by surprise,” was a spacecraft, not a missile.

Coverage of Milley’s remarks was widespread and mostly balanced across the spectrum on Wednesday. Coverage in some right-rated outlets mentioned Gen. Milley's Trump-era calls with his Chinese counterpart, Gen. Li Zuocheng. 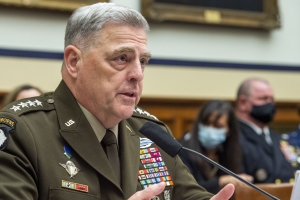 Gen. Mark Milley, the chairman of the Joint Chiefs of Staff, warned Wednesday that China's test of a hypersonic missile is "very concerning" and "very close" to the kind of "Sputnik moment" that triggered the Space Race during the Cold War.

Why it matters: The comments by America's top uniformed general underscore the depths of U.S. concerns about China's rapid military expansion and development of advanced weaponry.

The big picture: In 1957, the Soviet Union's stunning launch of the Sputnik satellite raised alarms that the U.S. was falling behind in a technology race. 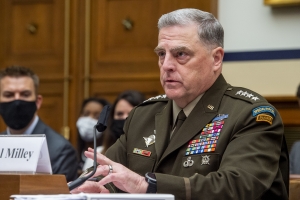 Gen. Mark Milley, chairman of the Joint Chiefs of Staff and the highest-ranking US general, warned that China’s possible hypersonic missile system is “very concerning,” calling it “very close” to a “Sputnik moment” that triggered the space race during the Cold War.

“What we saw was a very significant event of a test of a hypersonic weapon system. And it is very concerning,” Milley said during an interview with “The David Rubenstein Show: Peer-to-Peer Conversations” on Bloomberg Television. “I don’t know if it’s quite a Sputnik moment, but I think...

“What we saw was a very significant event of a test of a hypersonic weapon system. And it is very concerning,” General Mark Milley, chairman of the Joint Chiefs of Staff, said in an interview for “The David Rubenstein Show: Peer-to-Peer Conversations” on Bloomberg Television. “I don’t know if it’s quite a Sputnik moment, but I think it’s very close to that. It...

Read full story
Some content from this outlet may be limited or behind a paywall.
See full media bias rating for Bloomberg
More Stories »
China, Mark Milley, US Military, Nuclear Weapons, Hypersonic Missiles
Go ad-free! Support AllSides.
About these ads