President Trump's former lawyer Michael Cohen pleaded guilty on Tuesday to eight criminal charges, testifying that Trump directed him to break campaign finance law by arranging payments to two women who said they had affairs with then-candidate Trump. Many on the Left say that Cohen's plea is hugely problematic for the president as it implicates him as a co-conspirator. However, some others say that, while the charges are troublesome, they won't necessarily lead to impeachment. 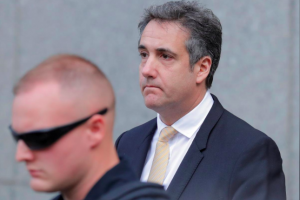 U.S. President Donald Trump’s former personal lawyer Michael Cohen testified on Tuesday that Trump had directed him to commit a crime by arranging payments ahead of the 2016 presidential

Harvard Law Professor Emeritus Alan Dershowitz said Tuesday on "Tucker Carlson Tonight" that attorney Michael Cohen's set of guilty pleas may cause some trouble for President Trump, but that they are not "lethal" to his presidency.

No one expects soaring oratorical peaks from President Joe Biden. That’s not his natural style. Yet his inaugural address was a powerful statement because...

After Democrats won control of the House of Representatives in the 2018 midterm elections, they introduced and passed the For the People Act as H.R. 1 — the...

President-elect Joe Biden plans to take 17 executive actions during his first hours in office Wednesday, moving faster and more aggressively to dismantle his...

Joe Biden’s transition team had no illusions about the chaos they were inheriting from President Donald Trump. They expected a disorganized government and...

Democrats took control of the Senate on Wednesday when three new members of the party were sworn in, giving a boost to President Joe Biden’s ambitions in the...

Donald Trump’s final job approval rating as president was 29% in a Pew Research Center poll released last week, the lowest of his presidency and a 9 percentage...

President-elect Joe Biden on his first day in office will take a range of executive actions, including implementing a national mask mandate on federal property...

It’s an odd way to seek national unity: call a significant portion of the American public white supremacists, racists, and nativists. Welcome to the Biden...

Democrats Officially Have A Majority In The Senate, Three Senate Democrats Sworn In By Harris

Three Democrats were officially sworn in as U.S. Senators on Wednesday, hours after President Joe Biden’s inauguration, giving Democrats a majority in the...

Let's be honest: The right is making a forced retreat. Here's how we can make it a strategic one that sets our ideas up for better success in the long run....