On Tuesday, the Senate Intelligence Committee released its Russia interference report. The 966-page report was a bipartisan investigation into potential collusion between the Trump campaign and Russian officials during the 2016 election. The Senate panel found no evidence that the Trump campaign conspired with the Russian government to influence the 2016 election, though it did find a list of contacts made between members of the Trump campaign and Russian officials; some of these contacts were allegedly made through Konstantin Kilimnik, a former associate of former Trump campaign manager Paul Manafort’s, who was named a “Russian intelligence officer” by the report. The Senate committee also heavily criticized the FBI’s vetting of former British intelligence officer Christopher Steele's opposition research file against Trump, saying the bureau's handling of the dossier “lacked rigor and transparency.”

Some coverage from right-rated outlets acknowledged the report painted Trump in a bad light, while other coverage from the right focused on the purported lack of evidence of collusion and the criticism of the FBI's handling of the Steele dossier. Coverage from left-rated outlets primarily focused on how the report ostensibly contradicted Trump's stance on the Russia investigation; some also highlighted Paul Manafort's alleged connections to Russian intelligence officers. 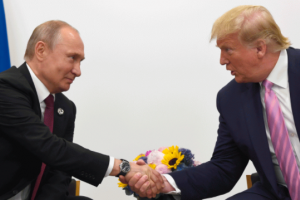 During the House Intelligence Committee’s impeachment hearings, Republican House members led by Rep. Devin Nunes repeatedly declared that the real scandal was not President Trump’s attempt to muscle the Ukrainian president but Ukraine’s supposed intervention in the 2016 election to harm Trump. Other Trumpers, including Rudy Giuliani, Fox News hosts, and assorted right-wing partisans and journalists, have passionately decried the Trump-Russia affair as a hoax and insisted that Ukrainian interference was the true wrongdoing. And Trump himself has denied that Vladimir Putin attacked the election, and he has called for...

The Senate Intelligence Committee on Tuesday released its long-awaited Russia interference report detailing significant contacts between the Trump campaign and Moscow during the 2016 election.

The fifth and final volume, just shy of 1,000 pages, lays out the counterintelligence threats and vulnerabilities that were exposed through Russian contacts and a willingness by some members of the Trump campaign to accept foreign assistance.

Its release comes more than a year after former special counsel Robert Mueller wrapped up his 22-month investigation in which he did not find evidence to charge any...

The Senate Intelligence Committee said in a long-awaited report released Tuesday that there is no evidence that the Trump campaign conspired with the Russian government to influence the 2016 election, affirming the findings of other investigations into an alleged Trump-Kremlin conspiracy.

The Intelligence Committee’s report, which clocks in at 966 pages, also offers a scathing assessment of the FBI’s handling of the so-called Steele dossier, a key document in the Trump-Russia collusion conspiracy theory.

President Joe Biden said the U.S. will stand up for human rights and pledged to raise the matter during his meeting with Russian President Vladimir Putin next...

The state-backed Russian cyber spies behind the SolarWinds hacking campaign launched a targeted spear-phishing assault on U.S. and foreign government...

Russia Appears to Carry Out Hack Through System Used by U.S. Aid Agency

Biden and Putin will meet face to face in Geneva in mid-June.

President Biden will meet President Vladimir V. Putin of Russia in Geneva on June 16, the White House said Tuesday, the first face-to-face session between the...

Brazil’s JBS SA (JBSS3.SA) told the U.S. government that a ransomware attack on the company that has disrupted meat production in North America and...

Russia warns U.S. of 'uncomfortable' signals ahead of Biden-Putin summit

Russian deputy foreign minister Sergei Ryabkov said Monday the country wanted to send the U.S. “uncomfortable” signals ahead of a meeting between ...

President Biden on Sunday said he will call on Russian President Vladimir Putin to respect human rights when the two leaders meet in Geneva in...

What We Know About The Apparent Russian Hack Exploiting A U.S. Aid Agency

The same Russian hackers who carried out the SolarWinds attack and other malicious campaigns have now attacked groups involved in international development,...

Biden-Putin summit will be held in Geneva on June 16

President Biden and Russian President Vladimir Putin will meet in Geneva, Switzerland, on June 16 for their first in-person summit, the White House announced...

The JBS meatpacking company was reportedly targeted by Russian hackers over the weekend, forcing it to shut down operations in North America and Australia....

Russian President Vladimir Putin is prepared to press President Biden on the “human rights” of Capitol rioters when they meet this month in Switzerland,...

A Russian criminal group was likely behind a ransomware attack on a major U.S. meat supplier, the second such breach in a matter of weeks as the leaders...

President Biden sent a warning to the presidents of China and Russia during his Memorial Day address on Sunday. "I had a long...

President Joe Biden will meet face to face with Russian President Vladimir Putin for the first time as commander in chief next month.The rivals...