McConnell Says He'd Back Trump in 2024

Senate Minority Leader Mitch McConnell (R-Ky.) said Thursday he'd "absolutely" support Donald Trump if he were the Republican Party's 2024 presidential nominee. The comments came in an interview with Fox News. McConnell said "there's a lot to happen between now and '24," and also mentioned that he knows of at least four people who are considering running.

McConnell's remarks made headlines throughout the spectrum. Many compared his recent comments to his criticism of Trump's role in the Capitol breach on Jan. 6, while noting that he did not vote to convict the president of inciting insurrection. Some coverage, particularly from left-rated outlets, framed the news as a sign of Trump's continued influence over the GOP.

McConnell Says He'd Back Trump in 2024 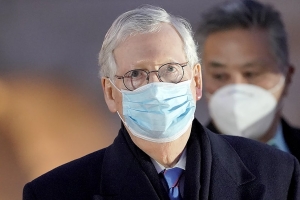 Senate Minority Leader Mitch McConnell (R-Ky.), who just weeks ago excoriated former President Trump on the Senate floor, blaming him for the riot at the Capitol, on Thursday said he would back Trump if he wins the party's 2024 presidential nomination.

"There's a lot to happen between now and '24. I've got at least four members that I think are planning on running for president. ... Should be a wide open race," McConnell said during an interview with Fox News's Bret Baier.

Asked if he would support Trump if he... 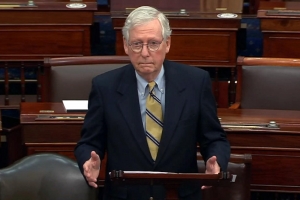 But, he says, a lot could happen between now then.

During an interview with Fox News' Bret Baier, the anchor asked McConnell if he believed Trump would be the GOP nominee during the next president election as some have predicted. 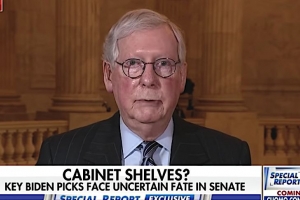 In a breathtaking turnabout, Senate Minority Leader Mitch McConnell (R-Ky.) said Thursday on Fox News that he would “absolutely” back Donald Trump for president in 2024 if he becomes the Republican Party’s nominee.

The startling support came less than two weeks after McConnell’s angry slam of the former president as “practically and morally responsible” for inciting last month’s deadly storming of the U.S. Capitol. “There’s no question,” McConnell said. “The people that stormed this building believed they were acting on the wishes and instructions of their president.” He called Trump’s...

How Trump is hunting down the GOP’s leading families

In his attempt to exercise full dominion over the Republican Party, Donald Trump has reserved a special fury for the dynasties that helped shape it. In the...

Even as Rep. Elise Stefanik has consolidated her position as the likely replacement for Rep. Liz Cheney as the No. 3 House Republican, her voting record has...

“Facebook Inc’s (FB.O) oversight board on Wednesday upheld the company’s suspension of former U.S. President Donald Trump but said the company was wrong to...

It’s all but certain that as early as next week House Republicans will strip Rep. Liz Cheney of her number-three GOP leadership position – but Cheney faces...