Shortly after being diagnosed with brain cancer, John McCain returned to Washington, D.C. to vote in favor of beginning the debate on repealing and replacing Obamacare. In a speech on the Senate floor, he called for more civil discourse, and said he could not yet support the GOP bill as it currently stands. Media coverage varied widely across the aisle - Left-leaning sources were more apt to condemn McCain's willingness to advance the repeal process, while Right-leaning sources emphasized his call for bipartisanship.

From the Center
344
Healthcare
McCain comes out against GOP healthcare bill, calls for bipartisan plan
The Hill 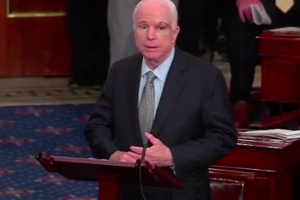 Sen. John McCain (R-Ariz.) returned to the Senate on Tuesday, urging his colleagues to work together and "trust each other" during his first floor speech since being diagnosed with brain cancer.

Shortly after being diagnosed with brain cancer, Sen. John McCain (R-AZ) flew back to Washington, DC, on Tuesday and voted to advance Republicans’ plan to repeal Obamacare.

Sen. John McCain (R-Ariz.) was greeted with a bipartisan standing ovation when he entered the Senate chamber Tuesday.

Nobody Accurately Tracks Health Care Workers Lost to COVID-19. So She Stays Up At Night Cataloging...

When police discovered the woman, she’d been dead at home for at least 12 hours, alone except for her 4-year-old daughter. The early reports said only that she...

ProPublica
Healthcare
When a Vaccine Arrives, People Will Ignore the Anti-Vaxxers
OPINION

Scientists are remarkably optimistic about their ability to develop a safe and effective vaccine for the coronavirus within the next six to 12 months. But even...

A group of doctors who participated in an event on the steps of the Supreme Court — a viral video of which was taken down the next day by social media...

Here’s what it could look like if schools reopened today. The novel coronavirus is spreading uncontrolled in more than 20 states. Let’s say that the...

Surviving COVID-19 is one thing. Becoming healthy again is another. Recent studies have found that even people who didn’t seem to have life-threatening cases...

Anthony Fauci, the nation’s top infectious disease doctor, on Friday said that he is “cautiously optimistic” a COVID-19 vaccine will be ready by the end of...

How can the U.S. solve its coronavirus testing troubles?

Since the early days of the coronavirus pandemic, the U.S. has struggled to keep up with the level of testing needed to track, let alone contain, the virus...

The law known as the Health Insurance Portability and Accountability Act, or HIPAA, is hugely misunderstood. And the latest people to misunderstand it are anti...

On July 13th, a federal judge permanently blocked Georgia’s recent heartbeat law from going into effect. The law would have prohibited abortion, barring...

CBN
Abortion
Sanofi, GSK coronanvirus vaccine to get up to $2.1 billion from U.S. government

Biden questions whether coronavirus vaccine will be 'real,' despite experts'...

Joe Biden is preemptively doubting whether a coronavirus vaccine will be "real," and has cast doubt on whether the vaccine would be distributed with "any...

The antiviral drug remdisivir has been effective in treating COVID-19, reducing risk of death for severely ill patients by 62 percent. It is also scarce,...

Herman Cain, a former 2012 Republican presidential candidate, has died at 74 after contracting the coronavirus and battling the infection for nearly a month,...