The Debate: The Colorado law mandates that people enjoy the "full and equal" service of all public business regardless of "disability, race, creed, color, sex, sexual orientation, gender identity, gender expression, marital status, national origin, or ancestry." The business owner argues that her website design business shouldn't be required to serve gay couples because it goes against her faith-based opposition to same-sex marriage.

For Context: The Supreme Court heard similar arguments over the same law in 2016 after Colorado’s civil rights commission penalized a baker for declining to bake a wedding cake for a same-sex couple.

Key Quotes: Liberal Justice Sonia Sotomayor asked, "How about people who don’t believe in interracial marriage? Or about people who don’t believe that disabled people should get married? Where’s the line?" Conservative Justice Samuel Alito then asked whether it’s "fair to equate opposition to same-sex marriage to opposition to interracial marriage?" He also asked if businesses can be "forced to write vows or speeches that espouse things they loath?"

How the Media Covered It: Outlets across the spectrum said the court's conservative majority seemed likely to side with the business owner, who a headline from LGBTQ Nation described as "anti-LGBTQ." Left-rated outlets tended to focus more on arguments in favor of the law. Right-rated outlets more often highlighted the business owner's faith and concerns about encroachments on religious freedom.

The Supreme Court heard arguments today in a case that could curtail states that seek to ban anti-LGBTQ+ discrimination, 303 Creative LLC v. Elenis.

Lorie Smith of Denver, Colorado owns 303 Creative, a web design business, and she sued the state preemptively to get a religious exemption to the state’s anti-discrimination law because she doesn’t want to make websites for same-sex couples’ weddings.

She says she “believes that God is calling her to promote and celebrate His design for marriage… between one man and one woman only” and her initial complaint... 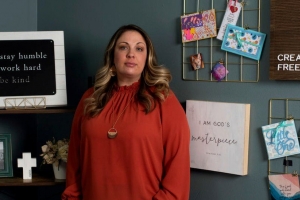 The US Supreme Court has heard arguments in the case of a graphic designer who refused to create wedding websites for same-sex couples.

It is the latest case to reach the top court that pits free speech rights against anti-discrimination laws.

Lorie Smith, from Colorado, argues she cannot offer her services to same-sex couples because of her Christian faith.

But this may violate a state law prohibiting businesses from refusing service due to sexual orientation.

Most US states have similar anti-discrimination laws in place. 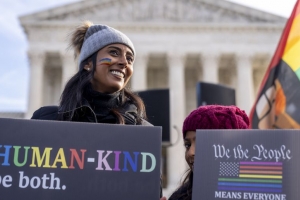 The Supreme Court grappled Monday with balancing free speech against gay rights, hearing a case involving a Colorado website designer who says she shouldn’t be compelled to violate the tenets of her faith by creating products for same-sex marriages.

Web designer Lorie Smith in her challenge of Colorado’s pro-LGBTQ law is asking the Supreme Court to protect her First Amendment right not to be forced to work on something she opposes.

She says having to design websites for same-sex marriages goes against her Christian faith and forces her to speak a message she doesn’t agree with. 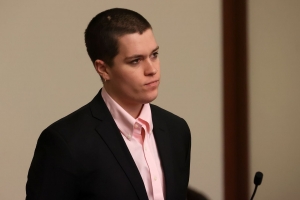