On Tuesday, the Senate Judiciary Committee questioned Facebook CEO Mark Zuckerberg and Twitter CEO Jack Dorsey about their companies' content moderation practices during the 2020 presidential election. Republican senators questioned the tech giants about content moderation and the purported censorship of President Donald Trump and conservative voices; Democratic lawmakers focused their questioning about moderating misinformation and hate speech. Democrats also called for more legislation and regulation of the tech industry, including tougher data privacy laws, changes to a law that gives the companies legal protection for content posted by users, and greater antitrust action. Republicans also called for reforming Section 230 of the Communications Decency Act, a 1996 law that protects companies from being sued over material users post on their platforms. 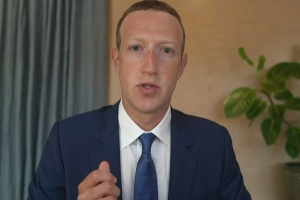 Democrats on the Senate Judiciary Committee spent Tuesday’s hearing chiding the CEOs of Facebook and Twitter for not stepping up their censorship efforts — despite Twitter’s unprecedented gagging of The Post’s account for two weeks and frequent masking of President Trump’s tweets.

Members of the panel grilled Facebook CEO Mark Zuckerberg and Twitter CEO Jack Dorsey for over four hours Tuesday as the pair face accusations of anti-conservative bias and censorship by the right and being lax on “misinformation” by the left.

They appeared to be unaware of the recent...

Republican senators on Tuesday attacked the chief executives of Facebook and Twitter for what they called censorship of President Trump and his allies during the U.S. election while Democrats bemoaned the spread of misinformation on social media. The CEOs, Jack Dorsey of Twitter and Mark Zuckerberg of Facebook, defended their content moderation practices at a congressional hearing scheduled after the platforms decided to block stories from the New York Post that made claims about the son of then-Democratic presidential candidate Joe Biden.

The move incited uproar among Republican lawmakers who...

The New York Times tracked each question. Here’s what we found.

Read full story
Some content from this outlet may be limited or behind a paywall.
See full media bias rating for New York Times (News)
More Stories »
Go ad-free! Support AllSides.
About these ads

I learned about the pilot test of Twitter’s new crowdsourced misinformation-labeling program the same way I learn about most news events that are relevant to...

Silicon Valley’s Offer of Sectoral Bargaining Is a Trick
OPINION

Any objective power structure analysis of the United States today reveals that we are teetering closer to the 1920s than during any decade since. In the 1920s...

Twitter is expanding its use of warning labels on tweets that contain misleading details about coronavirus vaccines. The move, announced in a blogpost on...

On March 3, SpaceX’s Starship pulled off a successful high-altitude flight—its third in a row. Unlike in the first two missions, the spacecraft stuck the...

Parler has withdrawn its antitrust action against Amazon, two months after filing the case against the tech giant. The website was removed from Amazon’s Web...

How to Spot a Deepfake Without Even Watching the Video

Deepfakes are videos that glue one person’s face onto another’s body, making the former look like they’re saying or doing something that they never actually...

Google to Stop Selling Ads Based on Your Specific Web Browsing

Google plans to stop selling ads based on individuals’ browsing across multiple websites, a change that could hasten upheaval in the digital advertising...

Google Announces End To Ad-Selling Based On Individual Web Browsing

On Wednesday, Google announced a shift in its current ad-selling policy in a move away from tracking users on an individualized level. Next year, the company...

Big Tech's dominance within the social, political, and economic spheres of life is not going unnoticed; reining it in has become a bipartisan aim, even if for...

Facebook Restores News Links in Australia After Getting Some Concessions

Facebook has relented, somewhat, in Australia. The social media company has worked out deals with three publishers in exchange for lifting a policy banning...

Some liberal users on Twitter appeared to be duped by a digitally modified photo depicting evangelicals praying to a golden Trump statue at CPAC this weekend...