House Minority Leader Kevin McCarthy says he won't voluntarily comply with the House select January 6 Committee's request to testify, calling the investigation an abuse of power that seeks only to damage its political opponents.

McCarthy and other Republicans have argued that the committee is not legitimate because there are no Republican-appointed members. The committee's two Republican members, Liz Cheney (Wyo.) and Adam Kinzinger (Ill.), are critical of former President Donald Trump's position on the 2020 election.

Committee Chair Bennie Thompson (D-Miss.) said the committee wants to look into any conversations that McCarthy had with Trump on the day of the riot, among other things. There are allegations that McCarthy discussed the potential of censure or impeachment with Trump at that time.  The Committee may now consider issuing subpoenas to the three House Republicans who have turned down requests to voluntarily testify. 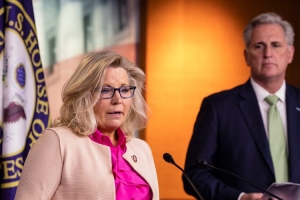 Rep. Liz Cheney said House Minority Leader Kevin McCarthy was trying to "cover up" what happened at the Capitol riot by refusing to work with the House committee investigating it.

Cheney, one of two Republicans on the committee, told CNN on Wednesday: "I wish that he were a brave and honorable man. He's clearly trying to cover up what happened. He has an obligation to come forward and we'll get to the truth."

She also refused to rule out the option of subpoenaing him, CNN reported.

McCarthy had said in a...

Read full story
Some content from this outlet may be limited or behind a paywall.
See full media bias rating for Insider
From the Left
306
US House
GOP leader McCarthy says he won’t cooperate with 1/6 panel
Associated Press Politics & Fact Check 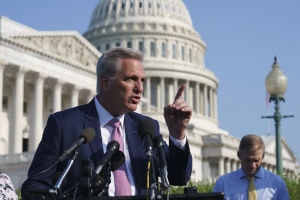 House Minority Leader Kevin McCarthy is refusing a request by the House panel investigating the U.S. Capitol insurrection to submit to an interview and turn over records pertaining to the deadly riot.

The panel is seeking first-hand details from members of Congress on then-President Donald Trump’s actions on the day hundreds of his supporters brutally beat police, stormed the building and interrupted the certification of the 2020 presidential election.

McCarthy, R-Calif., issued a statement Wednesday refusing to cooperate with the House committee. He said the investigation was not legitimate and...

House Minority Leader Kevin McCarthy said he will not voluntarily cooperate with the Jan. 6 select committee's inquiry into the Capitol riot.

“As a representative and the leader of the minority party, it is with neither regret nor satisfaction that I have concluded to not participate with this select committee’s abuse of power that stains this institution today and will harm it going forward," McCarthy said in a statement Wednesday night, just five hours after the committee made its request.

The Democratic-controlled House riot panel sent a letter to the California Republican on Wednesday afternoon...

Read full story
Some content from this outlet may be limited or behind a paywall.
See full media bias rating for Washington Examiner
More Stories »
US House, January 6 committee, Capitol Chaos, Kevin McCarthy
Go ad-free! Support AllSides.
About these ads