At least 25 deaths have been recorded this week as major floods have washed over eastern parts of Kentucky.

Kentucky Gov. Andy Beshear on Saturday said that the death toll "is likely to increase" as rescue teams continue to search for bodies. Nearly 300 people have been rescued in Kentucky so far, about 100 of them by aircraft. More than 17,000 people have been left without power in Kentucky as of Saturday afternoon, according to poweroutage.us. Beshear labeled the recent flash floods, which have washed away homes and damaged property across a broad stretch of 13 counties in Eastern Kentuck, as among the worst in state history.

Outlets across the spectrum similarly highlighted how scientists have warned that "intensified" precipitation events have become "increasingly common" due to human-caused climate change, but at the same time, the "specific" scientific analysis needed to prove so hasn't been conducted. 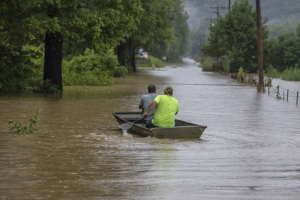 At least 25 people are dead amid devastating floods in Kentucky that have overtaken much of the eastern portion of the state, with concerns that conditions will worsen.

Gov. Andy Beshear said the flooding is among the most consequential kind that’s ever hit the state, and the death toll is likely to rise in coming weeks.

The governor said flooding hit Kentuckians overnight, prompting some to wake up to themselves being drifted away by water.... 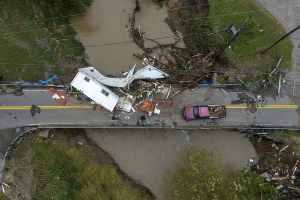 The death toll from flash floods triggered by torrential rain in eastern Kentucky earlier this week has climbed to 25, according to Gov. Andy Beshear.

Mr. Beshear said on Facebook Saturday that the state was still in the search-and-rescue phase and that the number of fatalities was likely to increase.

“I’m worried that we are going to be finding bodies for weeks to come,” he said Saturday at a briefing.

The governor said authorities now believe at least 4 children have died in the flooding, after earlier reports that six juveniles... 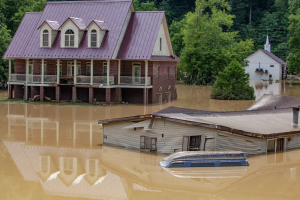 The response to some of the worst flooding in Kentucky’s history was entering a pivotal phase on Saturday morning, with the confirmed death toll at 25 and the search for victims poised to accelerate over a battered stretch of central Appalachia.

A cold front is expected to bring clearer weather to flood-stricken areas on Saturday, giving rescue personnel one less obstacle to contend with as they work to pluck more residents off rooftops. Nearly 300 people have been rescued in Kentucky so far, about 100 of them by aircraft, Gov. Andy Beshear told reporters...