On Wednesday, Politico reported that aides and officials on Vice President Kamala Harris's staff were dissatisfied with their work environment, with some calling it "tense" and "dysfunctional." Much of the criticism is aimed at Harris' chief of staff, Tina Flournoy; Flournoy reportedly restricts staff and allies' access to Harris, creating tension in the office and among outside donors and supporters. According to Politico, Harris's recent announcement of her trip to the southern border left her staff "scrambling" with little time to make necessary preparations. While Flournoy was heavily criticized, two anonymous administration officials said Harris is ultimately responsible for the way her office is run. Harris's spokesperson Symone Sanders told Politico that staff should raise issues directly, and called the anonymous officials "cowards." Sanders said, "We are not making rainbows and bunnies all day. What I hear is that people have hard jobs and I’m like ‘welcome to the club.' " 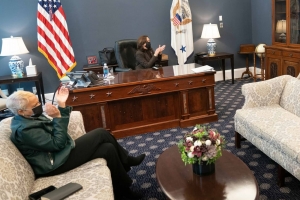 Tina Flournoy, the chief of staff for Vice President Kamala Harris, has established a reputation as a tough gatekeeper, using similar tactics to those she used while overseeing former President Bill Clinton’s post-White House office.

Flournoy’s tight approach, which includes blocking longtime allies from contacting Harris, has led to both praise and criticism.

It also has created tension within the vice president’s team and among her outside confidants and donors. Politico reported on Wednesday that there is dysfunction in Harris’ office and that much of the frustration stems from Flournoy. She oversaw... 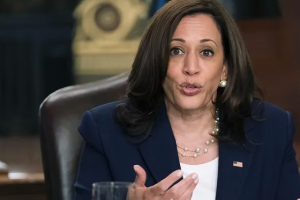 As Vice President Kamala Harris contends with intense scrutiny over her handling of the border crisis and other key issues, members of her staff are experiencing low morale and struggling to communicate with top staffers, according to multiple reports on Wednesday.

Communication issues and distrust between aides and senior officials on Harris’ team, including her chief of staff Tina Flournoy, have contributed to a "tense and at times dour office atmosphere." Politico reported, citing interviews with 22 current and former aides.

Much of the criticism was directed at Flournoy, who aides claimed has limited access to Harris... 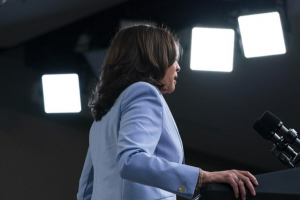 When Vice President Kamala Harris finally made the decision to visit the Mexico border last week, people inside her own office were blindsided by the news.

For days, aides and outside allies had been calling and texting with each other about the political fallout that a potential trip would entail. But when it became known that she was going to El Paso, it left many scrambling, including officials who were responsible for making travel arrangements and others outside the VP’s office charged with crafting the messaging across the administration.

Vice President Kamala Harris was delayed from departing on a trip to Vietnam after the State Department issued a warning of a “possible anomalous health...

The vice president is building relationships with a wide array of Democratic allies, which she could leverage in the administration — and a future presidential...

The signs in downtown San Francisco that day, outside of the University of California Hastings College of the Law, might as well have been plucked from today’s...

Tina Flournoy, the chief of staff for Vice President Kamala Harris, has established a reputation as a tough gatekeeper, using similar tactics to those she used...

A contingent of 50 law enforcement officers from Florida began deploying to the Mexican border Friday, as Gov. Ron DeSantis made true on his vow to heed calls...

Some popular online posts suggest that Vice President Kamala Harris’ trip to El Paso is “over 1000 miles away” from the “border crisis.” It’s true that other...

Kamala Harris delivered remarks on personal rights on abortions during a women’s reproductive rights roundtable, but failed to link the point to the issue of...

The chimes of the Bells of Remembrance at the memorial service for the victims and heroes of Flight 93 in Shanksville, PA, was followed Saturday by a...

In Singapore on Tuesday, Vice President Kamala Harris scolded China for trying to bully its neighbors in the South China Sea region.  The vice...

Vice President Kamala Harris at last spoke publicly on what is happening in Afghanistan as Americans and Afghans try to exit the country...

As large crowds swarm Afghanistan’s Kabul airport to flee the Taliban takeover of the country, Vice President Kamala Harris is embarking Friday on a trip to...