An American service member was among 10 people killed in a suicide car bombing in Kabul, Afghanistan. The attack was claimed by the Taliban, whom the United States is currently discussing a peace deal. A tentative deal has been struck, contingent upon approval by President Donald Trump. 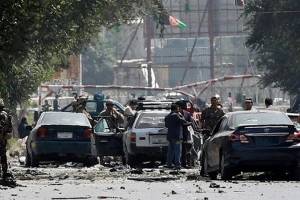 A Taliban suicide car bombing in the Afghan capital killed at least 10 Afghan civilians, a US service member and a Romanian soldier in the second such attack this week after a preliminary US-Taliban peace deal was announced.

The blast took place on Thursday in Shash Darak, a heavily fortified area adjacent to the Green Zone and home to several important complexes, including the National Directorate of Security (NDS), the Afghan intelligence service, and the US embassy.

Read full story
See full media bias rating for Al Jazeera
From the Right
1098
Terrorism
U.S. soldier is among those killed in Taliban suicide blast in Kabul near the American embassy
Daily Mail 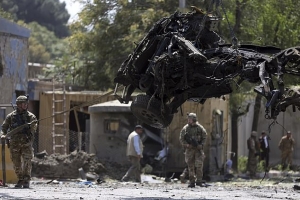 A Taliban suicide blast in the center of Kabul has killed a U.S. soldier, a Romanian service member and at least 10 civilians near the headquarters of Afghanistan's international military force and the American embassy.

The American and Romanian service members killed on Thursday when the car bomb exploded were both NATO soldiers.

It is the second major attack this week as the Afghan government warned that a U.S.-Taliban deal on ending America's longest war was moving at dangerous speed.

The NATO Resolute Support mission, whose offices were near...

Washington (CNN)A US service member was killed in a suicide car bomb attack Thursday in Kabul, Afghanistan, at a checkpoint near NATO headquarters and the US embassy, a US military official with direct knowledge of the incident said.

Another service member from Romania also was killed, the NATO-led coalition announced in a statement.
The attack did not penetrate the security perimeter, the official said.

The Hill
Terrorism
U.S. carries out air strike on Taliban, calls for halt to 'needless attacks'