InfoWars (Right bias) founder and talk show host Alex Jones will have to pay millions to the parents of a Sandy Hook shooting victim over his false claims that the shooting was staged.

A jury in Texas ruled Thursday that Jones must pay the parents $4.1 million in compensatory damages. The parents originally asked for $150 million in damages for defamation and intentional infliction of emotional distress. Next, the jury will decide whether Jones must also pay punitive damages, and if so, how much.

A lawyer for the parents said they were "very pleased with the verdict." During the trial, Jones repeated his 2019 admission that the shooting was real. Following the ruling, he said that the jury "understood the truth and resisted the propaganda."

News sources across the political spectrum covered the news with a similar focus on Jones' lies about Sandy Hook and the jury's decision. Left- and center-rated sources focused on the news more, often describing Jones as a right-wing conspiracy theorist. Voices from left- and center-rated sources were more likely to accuse Jones and InfoWars of intentionally spreading harmful conspiracies. One Washington Post (Lean Left bias) writer tied Jones' trial to former President Donald Trump and a "wider circle of grifters who amassed wealth and power by using lies to stoke MAGA-style paranoia and rage." 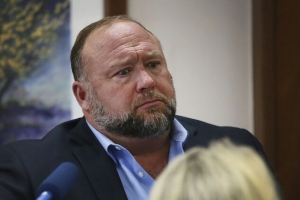 A Texas jury on Aug. 4 ordered Alex Jones, founder and host of the Infowars radio show and webcast, to pay $4.1 million to the parents of a boy killed in the Sandy Hook mass shooting, marking the first time he has been held financially liable for spreading the false claim that the shooting was a hoax.

Sandy Hook refers to the deadliest school shooting in U.S. history, when 20-year-old Adam Lanza shot and killed 26 people—20 of whom were children between 6 and 7 years old—at Sandy Hook Elementary School in Newtown, Connecticut, on Dec. 14, 2012....

Read full story
Some content from this outlet may be limited or behind a paywall.
See full media bias rating for The Epoch Times
From the Center
6835
Fake News
Alex Jones Rants at 'Damn Lawyers' After Sandy Hook Trial
Newsweek 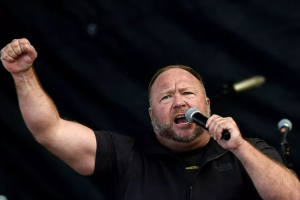 Far-right conspiracy theorist Alex Jones complained about his lawyers on his InfoWars show following an order from a judge to pay one of the Sandy Hook families $4.1 million in damages.

Sandy Hook parents Neil Heslin and Scarlett Lewis, whose six-year-old son Jesse Lewis was killed in the school shooting, had initially asked the jury to order Jones to pay up to $150 million in damages.

Despite the much lower figure, they are reported to be "thrilled" by the actions of the jury in the defamation trial. The $4.1 million doesn't include punitive damages,...

Read full story
Some content from this outlet may be limited or behind a paywall.
See full media bias rating for Newsweek
From the Left
6835
Fake News
Jury finds Alex Jones caused $4 million in damages to two Sandy Hook parents
CNN Business 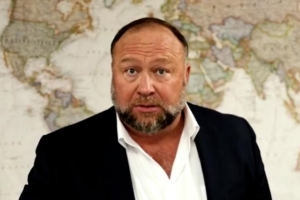 Right-wing talk show host Alex Jones will have to pay the parents of a Sandy Hook shooting victim a little more than $4 million in compensatory damages, a jury decided Thursday, capping a stunning and dramatic case that showcased for the public the real-world harm inflicted by viral conspiracy theories.

The award from the jury was far less than what the plaintiffs, Scarlett Lewis and Neil Heslin, had asked for. At the start of the trial, attorneys for Lewis and Heslin asked the jury to award their clients $150 million in compensatory...