A federal judge has rejected President Trump's challenge to the release of his tax returns for a New York State criminal probe. The probe centers on the Trump Organization's possible involvement in buying the silence of two women who claimed to have had affairs with the President.

Trump's lawyers have said the investigation is politically motivated and that the quest for his tax returns should be stopped. The federal judge in New York has said that he does not support what he sees is an assertion of presidential immunity from judicial process.

President Trump is appealing this decision. 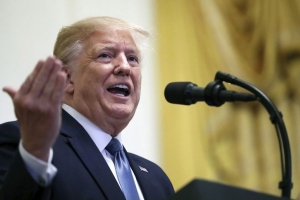 President Trump must turn over his tax returns to a New York grand jury, a federal judge ruled Monday, rejecting the White House’s effort to shield him.

Judge Victor Marrero called the president’s attempt to avoid turning over his taxes in a criminal case “extraordinary,” and rejected Mr. Trump’s claims that he would be distracted from his official duties by having to worry about complying with the prosecutors’ demands.

“The interest the president asserts in...

A federal judge on Monday dismissed a lawsuit brought by President Donald Trump to block a subpoena for eight years of his tax returns, rejecting the President's "extraordinary" claim that any occupant of the White House enjoys "absolute immunity from criminal process of any kind."

Describing Trump's argument as a "categorical and limitless assertion of Presidential immunity," US District Court Judge Victor Marrero wrote in an opinion that it "would constitute an overreach of executive power."
Trump brought the lawsuit after the Manhattan district attorney's office subpoenaed his longtime... 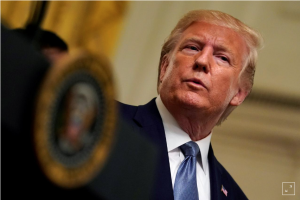 President Donald Trump cannot block a request to hand over eight years of tax returns to Manhattan prosecutors, a federal judge ruled, after Trump claimed he was immune from being sued.

Trump quickly filed an emergency notice of appeal to the federal appeals court in Manhattan.

He also criticized Trump for advancing what the judge called an argument that the president, his family and businesses “associated with him in potentially unlawful...

Reuters
Politics
Should Politicians be Exempt from Fact-Checks on Facebook?