According to reporting from The Guardian, Amazon founder and Washington Post owner Jeff Bezos' phone was hacked in May 2018 by Saudi Arabia. Supposedly, a Whatsapp message from Saudi crown prince Mohammed bin Salman to Bezos contained a malicious link, which allowed Saudi intelligence to collective sensitive information. The United Nations called for a probe into the matter, saying the alleged hack was potentially part of an effort to undermine the Post and the American press. 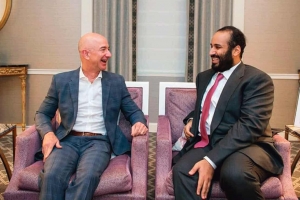 The Amazon billionaire Jeff Bezos had his mobile phone “hacked” in 2018 after receiving a WhatsApp message that had apparently been sent from the personal account of the crown prince of Saudi Arabia, sources have told the Guardian.

The encrypted message from the number used by Mohammed bin Salman is believed to have included a malicious file that infiltrated the phone of the world’s richest man, according to the results of a digital forensic analysis.

This analysis found it “highly probable” that the intrusion into the phone was triggered by... 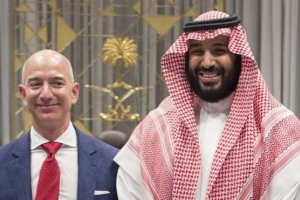 They said Mohammed bin Salman should also be investigated for "continuous, direct and personal efforts to target perceived opponents".

A message from a phone number used by the prince has been implicated in a breach of Mr Bezos's data.

The kingdom's US embassy has denied the "absurd" story. 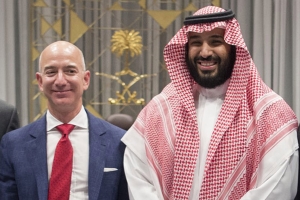 The kingdom’s US embassy called for an investigation into The Guardian’s report that Bezos’ phone was infiltrated when a malicious file was sent in 2018 during a “seemingly friendly” chat between the pair on WhatsApp.

The report had stressed that it was unclear what was taken — although the timing coincides with supposed hacked messages to then-mistress Lauren Sanchez that included crotch shots and naked selfies....

The “unregulated spaces of social media platforms” are increasingly serving as “instruments for political distortion,” according to a new analysis from the...

A Must For Millions, Zoom Has A Dark Side — And An FBI Warning

Dennis Johnson fell victim last week to a new form of harassment known as "Zoombombing," in which intruders hijack video calls and post hate speech and...

The full client list of Clearview AI, the embattled facial-recognition company, was stolen by someone with "unauthorized access," The Daily Beast first...

The United States needs to lead the development of 5G wireless network standards, assess any vulnerabilities to hacking, and address national security dangers...