Right-wing candidate Jair Bolsonaro won Brazil's presidential election on Sunday, ending a highly controversial and violent campaign. Bolsonaro has been lauded by some for his commitment to fighting crime and furthering conservative economic ideals, while others have said that his support for lethal force against suspected criminals will violate civil liberties and that his policies will damage the environment. He has also received backlash for his divisive rhetoric, which included insults towards women, blacks, and the LGBT community. 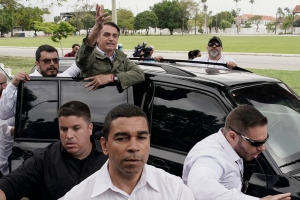 Brazil on Sunday became the latest country to drift toward the far right, electing a strident populist as president in the nation’s most radical political change since democracy was restored

He has vowed to drain the swamp, slash regulations and get tough with China. Evangelicals and gun-rights advocates love him. He has denounced the media as “fake news.” Political foes?

The Flip Side
World