Italy's COVID-19 vaccine mandate, believed to be among the strictest government COVID-19 mandates in the world, has been met by protests. The newest rule requires all private and public employees in Italy to show proof of vaccination, a negative test result, or recovery from COVID-19 in the past six months with what's known as a "Green Pass." Workers could be fined up to 1,500 euros, or roughly $1,750, for failing to comply with the new rule. Hundreds of port workers in the northeastern city of Trieste protested the rule over the weekend, and hundreds more attended an anti-mandate demonstration in Florence. Last week, thousands of people marched in Rome earlier this month in opposition of government mandates.

The news was covered across the spectrum, but given less attention by U.S. media than domestic issues. Reports on all sides highlighted how people are upset that the government won't cover the cost of testing swabs, which unvaccinated people will need to use frequently to avoid fines. Right-rated outlets tended to offer more quotes from people protesting the mandate. Some coverage from left-rated sources framed anti-mandate protests in Italy as a product of conspiracy theories. 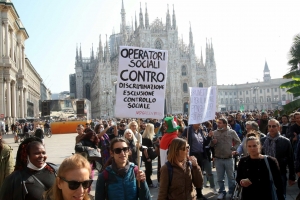 Italy on Friday set a new bar for major Western democracies seeking to move beyond the pandemic by enacting a sweeping law that requires the nation’s entire work force — public and private — to have government-issued health passes, essentially forcing Italians to choose between getting a pass and earning a living.

With the step, Italy, the first democracy to quarantine towns and apply national lockdowns, is again first across a new threshold, making clear that it is willing to use the full leverage of the state to try to curb...

Read full story
Some content from this outlet may be limited or behind a paywall.
See full media bias rating for New York Times (News)
From the Center
314
World
Hundreds of port workers in Italy are striking against a new vaccine mandate
Quartz 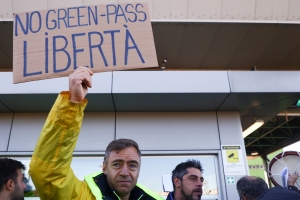 Italy’s new covid-19 rules went into effect on Oct. 15, prompting labor strikes and protests across the country. The mandate, one of the strictest in the world, requires employees in the public and private sectors to show proof of vaccination, a negative test, or recovery from the virus in order to go to work. Those who don’t comply may be fined up to €1,500, or $1,760.

The measure, which was approved by prime minister Mario Draghi’s government on Sept. 16, aims to boost vaccinations among a population that has been particularly hard...

Read full story
Some content from this outlet may be limited or behind a paywall.
See full media bias rating for Quartz
From the Right
314
World
Italy Mandates All Workers to Show COVID-19 ‘Green Pass,’ Prompting Protests
The Epoch Times 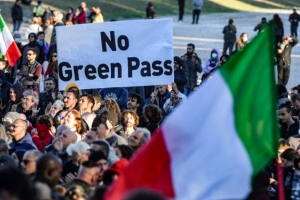 The Italian government imposed one of the world’s strictest COVID-19 measures on Friday, requiring all workers in Italy to show a COVID-19 “Green Pass” prior to entering their place of employment.

Starting on Oct. 15, the new rule will make it obligatory for employees to show that they have been vaccinated against the CCP (Chinese Communist Party) virus, which causes COVID-19, before returning to their workplaces. A recent negative test or having recovered from COVID-19 in the past six months is also allowed.

Workers who are not in possession of the so-called Green Pass will...