On Saturday, an Israeli airstrike targeted Gaza city in an area that includes the home of a Hamas leader and an 11-story building that housed an Associated Press bureau and an Al Jazeera bureau. The building allegedly held “military assets belonging to the military intelligence of the Hamas terror organization,” Israeli authorities said, according to Al Jazeera. Israeli authorities reportedly ordered people to evacuate an hour before the airstrike. Al Jazeera condemned the attack in a statement, calling it a "clear act to stop journalists from conducting their sacred duty to inform the world and report events on the ground," while the Associated Press said on Saturday it was “shocked and horrified” by the Israeli air attack. Hamas continued to strike Israel over the weekend, including a barrage on Tel Aviv. On Saturday, the White House said that the safety of reporters covering the Gaza conflict "is a paramount responsibility." 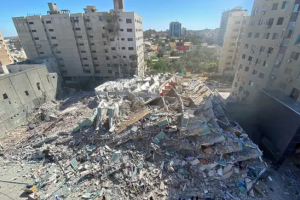 The Israeli air force has destroyed a tower block in Gaza City housing the offices of the Associated Press and Al Jazeera in what has widely been decried as an attack on press freedom.

The airstrikes on Saturday – the sixth consecutive day of hostilities between Israel and Hamas – came roughly an hour after the Israeli military ordered people to evacuate al-Jalaa tower.

There was no immediate explanation beforehand for why the 15-storey building was targeted. As well as the two international media organisations, the high-rise was home to... 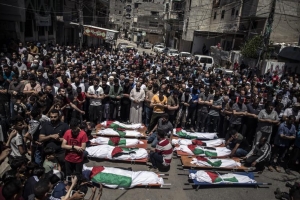 Israel slammed the Gaza Strip with airstrikes on Saturday, in a dramatic escalation that included bombing the home of a senior Hamas leader, killing a family of 10 in a refugee camp — most of them children — and pulverizing a high-rise that housed The Associated Press and other media.

The Hamas militant group continued a stream of rocket volleys into Israel, including a late-night barrage on Tel Aviv. One man was killed when a rocket hit his home in a suburb of the seaside metropolis. 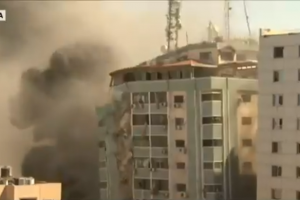 The Al-Jalaa tower collapsed after being struck by at least three missiles, according to Al Jazeera. No casualties among the civilians have been reported, as Israeli authorities had ordered people to evacuate an hour before the airstrike.

The aftermath of this month’s violence in the Gaza Strip is deepening the pressure on Google, Amazon and Facebook to reexamine their close ties to Israel — an...

Jewish Democrats clash with Ilhan Omar after comments on U.S. and Israel

A group of Jewish Democrats in the House is publicly feuding with Rep. Ilhan Omar (D-Minn.) after she tweeted about "unthinkable atrocities committed...

House Democratic leadership rebuked Representative Ilhan Omar (D., Minn.) over a tweet in which she compared the U.S. and Israel to the Taliban and Hamas. “...