The Intercept (Left bias) released a video and an article on Thursday criticizing journalists for the Daily Caller, Townhall and other right-rated news outlets for their coverage of protests and riots during the summer of 2020. The Intercept's article accuses "members of an informal club of right-wing video journalists" of distorting reality around the civil unrest and stoking "the conservative media’s hunger for images of destruction and violence on the margins of left-wing protests." The Intercept piece received significant blowback from the right side of the media, with many accusing the writers of advancing politically-motivated disdain instead of legitimate news. Intercept founder Glenn Greenwald, who has since left the outlet, accused the "two white male reporters" who wrote the piece of singling out journalists of color.

The story was barely covered by any left- and center-rated outlets as of Friday morning. It was much bigger news in right-rated outlets, where most were highly critical of The Intercept for publishing the piece and defensive of the protest and riot coverage from the right-rated journalists.

From the Left
13271
Media Industry
Meet the Riot Squad: Right-Wing Reporters Whose Viral Videos are Used to Smear BLM
The Intercept 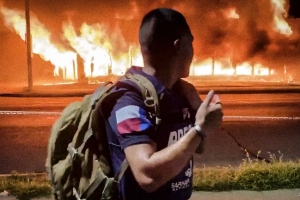 THE SOUND OF glass breaking, on Inauguration Day in Portland, Oregon, was music to the ears of Julio Rosas, a young video journalist.

That’s because Rosas, who works for the right-wing website Townhall, specializes in shooting viral video of mayhem at left-wing protests. On this day, black-clad, anti-capitalist protesters were attacking a Democratic Party office, and Rosas managed to record them from close range without being spotted.

Within minutes of the vandalism, by a handful of activists who broke off from a small #J20 march, Rosas posted his video on... 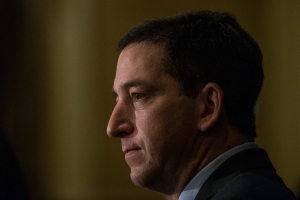 Glenn Greenwald took to Twitter on Thursday to criticize the publication he co-founded for attacking a group of conservative reporters who recorded last year’s racial protests.

“The Intercept is now actively targeting two journalists of color,” Greenwald wrote. “They have two white male reporters here putting a target on their backs for the crime of reporting on Antifa riots. This is genuinely disgusting and dangerous. Press freedom groups should condemn this.”

He was referencing a column published Thursday morning by the publication’s Robert Mackey and Travis Mannon in which the...

Read full story
Some content from this outlet may be limited or behind a paywall.
See full media bias rating for Mediaite
From the Right
13271
Media Industry
We Shouldn’t Need the ‘Riot Squad’ — But We Do. A Response to The Intercept
National Review 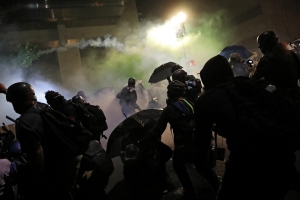 If you were lucky enough to get off the Internet for any extended period of time early last summer, you probably would have had no idea that cities across the country were being consumed by political violence on a scale unseen since the 1960s.

If, in May and June, you limited your media diet to the major newspapers, CNN and MSNBC, you would have been unaware that intense property damage and physical violence was being perpetrated by rioters each and every night in Kenosha, Wis., Portland, Ore., and just about...

What makes a news story trustworthy? Americans point to the outlet that publishes it, sources cited
DATA

Americans see a variety of factors as important when it comes to deciding whether a news story is trustworthy or not, but their attitudes vary by party...

Teach students to get beyond the basic Google search

I remember getting an email from a seasoned reporter who asked me why he was having trouble finding articles on his topic in Nexis, a database used to search...

Biden excludes US reporters from ‘very good’ meeting with Erdogan

President Biden said Monday he had a “good meeting” with Turkish President Recep Tayyip Erdogan after a last-minute decision to exclude US reporters from the...

A newspaper in Texas said on Saturday that it is not publishing the description that local law enforcement gave of a man suspected of shooting 13 people on...

On Wednesday, CNN Executive Vice President and General Counsel David Vigilante made a revelation sure to startle those unaware of the state's vast power to not...

Journalists can spend a fair amount of time discussing and defending their work on Twitter. But there is one complaint that readers should know will probably...

Chicago Mayor Lori Lightfoot said Friday her previous policy of only granting interviews to journalists of color “started a long-overdue...