The House Judiciary Committee approved two articles of impeachment against President Donald Trump Friday morning, making a full House vote on impeaching the president likely to happen next week. Committee Chairman Jerrold Nadler (D-NY) had ended a 14-hour hearing on impeachment articles Thursday shortly before midnight, asking members on both sides to "search their consciences" before casting final votes on the articles Friday.

Reports from around the spectrum focused on apparent outrage from Republicans, who accused Nadler of delaying the hearing for television purposes, and from Democrats, who believed GOP members were trying to keep the hearing out of the normal news cycle. 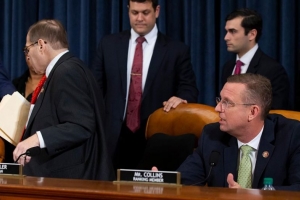 Gobsmacked Republicans made known their fury and frustration late Thursday as House Judiciary Committee Chairman Jerry Nadler, D-N.Y., abruptly wrapped up an all-day marathon hearing on the adoption of two articles of impeachment against President Trump by delaying planned votes on the matter until Friday morning.

"It is now very late at night," Nadler said shortly before midnight in D.C. "I want the members on both sides of the aisle to think about what has happened over these last two days, and to search their consciences before we cast their...

WASHINGTON — The House Judiciary Committee seems poised to approve two articles of impeachment against President Donald Trump after a full day of debate from both sides on amendments that left members in a recess until Friday.

Committee members debated for more than 14 hours over the abuse of power and obstruction of Congress articles, which allege the president used the power of his office to pressure Ukraine to open an investigation into former Vice President Joe Biden that would benefit his 2020 campaign, and that he blocked Congress from... 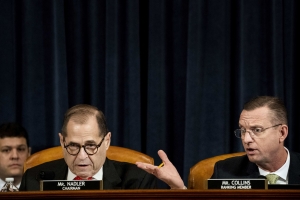 The House Judiciary Committee spent more than 14 hours Thursday locked in a rancorous and contentious debate about whether to approve two articles of impeachment against President Trump, with Democrats making an abrupt decision before midnight to hold off on the history-making vote until Friday morning.

The all-day debate ended as it began, with angry exchanges, personal insults and recycled arguments about process and propriety as the committee moved toward voting to impeach Trump for “high crimes and misdemeanors.”

“It has been a long two days of consideration of these...

First it was fear, now it's rage. Following up on his 2018 best-selling book "Fear," legendary investigative journalist Bob Woodward's new book on President...

President Trump doesn’t understand or doesn’t care about the most basic principle of American government: Power is divided among three branches of government....

The reason Kamala Harris was a bad presidential candidate is the reason she could be a good vice...
ANALYSIS

The knock on Kamala Harris, presidential candidate, is that she was all California flash and no substance: She was impressive on paper and had an inspiring...

While using brightly colored magic markers to write articles in a makeshift bullpen deep beneath the White House, an ink-splattered Eric Trump and Donald Trump...

It’s Way Too Soon To Count Trump Out
ANALYSIS

Joe Biden currently has a robust lead in polls. If the election were held today, he might even win in a landslide, carrying not only traditional swing states...

How does Kamala Harris change the presidential race?

The president's son-in-law and senior adviser Jared Kushner met recently with hip hop artist Kanye West as the latter has stepped up his efforts to be on the...

Trump Plans To Give Convention Speech On White House Grounds

President Trump says he will deliver his speech accepting the presidential nomination during the Republican National Convention speech from the White House...

The Return of Pen-and-Phone Constitutionalism
OPINION

Is Kamala Harris as Safe a VP Pick as She Seems?
ANALYSIS

So, it’s Kamala. After all the speculation about whom Biden might pick to be his running mate, he chose the woman most likely to get the nod all along,...

The Daily Wire
Violence in America