On Tuesday night, Fox News Host Tucker Carlson interviewed Tony Bobulinski, the former CEO of SinoHawk Holdings, which he alleged was the partnership between CEFC Chairman Ye Jianming and Hunter Biden. Bobulinski claimed he expressed concern to Joe Biden's brother Jim in 2017 about their family's alleged ties to a joint venture with a Chinese energy firm. Bobulinski alleged Jim Biden dismissed the concern, claiming "plausible deniability." In the interview, Bobulinski recalled details of a meeting he supposedly had with the Bidens in May of 2017, and he allegedly turned over devices and business records relating to these Biden dealings and was interviewed by the FBI. The Biden campaign has repeatedly denied that Joe Biden was involved in Hunter's foreign business dealings.

The interview was widely covered by right-rated news outlets, whose coverage tended to frame the interview as significant evidence of Biden being involved in corrupt foreign business ventures. There was little to no coverage of the interview from left- or center-rated outlets, though Newsweek and Politico covered the story. Politico framed the interview as an attempt by Trump and his supporters to string together a narrative of Biden family corruption. 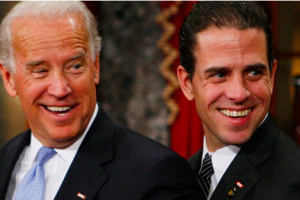 Tony Bobulinski, Hunter Biden’s former business partner, sat down with Fox News’ Tucker Carlson for a no-holds-barred interview for 45 minutes. Bobulinski didn’t want this interview. He doesn’t need to do it, but his reputation was being smeared as Russian misinformation. He was a guest at the final debate and when the former vice president denied being involved in Hunter’s business dealings, he almost stood up and shouted, “liar.”

He added that Joe Biden is the “big guy” referenced in an equity arrangement with a shady Chinese firm with ties...

Tony Bobulinski, a former business associate of Hunter Biden, claimed in an interview Tuesday that the Biden family shrugged off concerns that Joe Biden’s alleged ties to his son's business deals could put a future presidential campaign at risk.

Bobulinski, in an interview with Fox News’ “Tucker Carlson Tonight,” said he raised concerns in 2017 to the former vice president's brother Jim Biden, about Joe Biden’s alleged ties to a possible joint venture with a Chinese energy firm.

Weeks ago, when Rudy Giuluani first threw the contents of Hunter Biden’s alleged laptop online, he promised a trove of even more damning information 10 days before the election.

Yet with less than a week to go, Giuliani, President Donald Trump’s personal lawyer, is still moving down the conservative media food chain, looking for takers.

News
NYT Issues Major Correction After Claiming 900,000 Kids Have Been Hospitalized With COVID
The Daily Caller

Analysis
Politico Finally Acknowledges That Major Portions Of Hunter Biden Story Have Been Verified, Something Conservative Outlets Reported Long Ago
The Daily Wire

News
White House praises Fox for its new Covid policy, encourages network to 'convey to their audience' why it's effective
CNN Business

Analysis
A Nobel Prize and a horse dewormer: Explaining the controversy over ivermectin and COVID-19
PolitiFact