Former White House communications director Hope Hicks is rejoining President Donald Trump's administration after a two-year hiatus, according to reports this week. The 31-year-old, one of Trump's closest aides before resigning the post, will work with the Republican's son-in-law, Jared Kushner, in a different capacity. 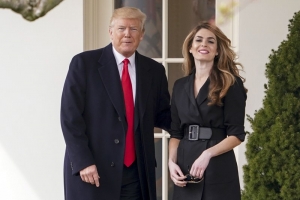 WASHINGTON (AP) — Hope Hicks, one of President Donald Trump’s most trusted and longest-serving aides, is returning to the White House as the president works to surround himself with loyalists as his reelection campaign moves into high gear.

Hicks, a former White House communications director who was one of Trump’s original 2016 campaign staffers, is expected to serve as counselor to the president, working with presidential son-in-law and senior adviser Jared Kushner, according to a person familiar with the situation who spoke on condition of anonymity before the announcement had...

Former White House communications director Hope Hicks is set to return to the White House in a different role.

Hicks will join President Donald Trump’s son-in-law Jared Kushner’s team, according to a report Thursday from The New York Times. The report stated that Hicks will be a “counselor to the president,” but that she will not be in the communications office.

President Donald Trump is surrounding himself with loyalists after a week of banishing staffers across the government in a post-impeachment revenge plot.

On Thursday, the White House confirmed that Hope Hicks, one of Trump’s most trusted confidants, will return to the White House to work directly for the president’s son-in-law and top adviser, Jared Kushner, as a senior adviser after nearly two years away. Trump’s “body man” Johnny McEntee is also being promoted to run the office responsible for filling hundreds of top political jobs throughout the federal agencies, according...

After Kushner says 'it's our stockpile,' HHS website changed to echo his comments on...

It was a telling moment in the rising tensions between the Trump White House and state governors desperate for medical equipment to deal with the exploding...

Desperate for insight, Trump's team turns to the past to try and save his presidency

When the avian flu first spread to pockets of Southeast Asia in 2005, President George W. Bush reassured Americans he would be prepared if the viral infection...

Jared Kushner, President Trump's son-in-law and senior adviser, criticized governors Thursday, saying they don't have a handle on their own supplies of masks...

Trump says CDC advises cloth masks to protect against coronavirus, but he will not wear one