A clinic trial for a new Alzheimer’s treatment has yielded positive results in slowing cognitive decline. The drug, named Lecanemab, is being developed by Cambridge-based Biogen and Tokyo-based Eisai. Shares in both companies, and other companies researching the disease, jumped after results were announced.

The drug works by targeting proteins called beta-amyloids that harden into plaque that researchers believe is a contributor to Alzheimer’s. Early results showed that Lacanemab reduced cognitive decline by 27% after 18 months of treatment. The developers are seeking accelerated approval from the Food and Drug Administration.

Biogen’s last attempt at an Alzheimer's treatment, called Aduhelm, effectively failed at market last year due to its $56,000 annual price tag and its unproven effectiveness. The key difference between last year’s Aduhelm and this year’s Lecanemab is that Aduhelm targets proteins already hardened into plaque, and Lecanemab targets proteins not yet hardened. Eisai has said that Lecanemab’s annual price tag will fall somewhere between $9,249 and $35,605. This raises its chances of being covered by Medicare, which Aduhelm largely was not.

Coverage of the trial’s findings have emphasized the significance of the treatment’s early success. Axios (Center Bias) and Associated Press (Lean Left Bias) both covered the financial aspect of the drug, highlighting how it must become cheaper and more proven-effective for doctors to begin recommending it and insurance companies to begin covering it.

Shares of Biogen and other drugmakers researching Alzheimer’s disease soared Wednesday after Japan’s Eisai Co. said its potential treatment appeared to slow the fatal disease in a late-stage study.

The drugmaker said early results showed that its treatment, lecanemab, reduced patient clinical decline by 27% when compared to a placebo or fake drug after 18 months of the infused treatment.

Patients were monitored using a scale that measures mental decline and their ability to...

Another prospect for an Alzheimer's drug renews cost concerns
Axios 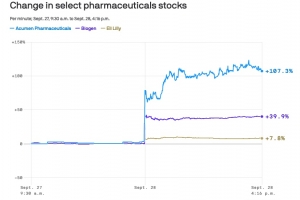 The prospect of an effective new Alzheimer's treatment came roaring back this week with the announcement of preliminary clinical trial data, giving millions of seniors renewed hope after a tumultuous year.

Why it matters: Alzheimer's is a devastating disease, and the topline results boosted analysts' expectations for an entire class of drugs targeting the condition. But they also resurrect enormous questions about who'll cover the costs and how the U.S. will oversee what's likely a multi-billion dollar market.

Driving the news: The success of Eisai and Biogen's clinical trial of... 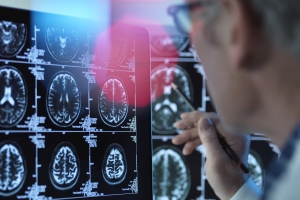 A new drug can slow the insidious impact of Alzheimer’s disease, a major clinical trial has found.

Patients taking the drug, known as lecanemab, showed a 27% decrease in cognitive decline compared to a control group, according to developers Biogen, based in Cambridge, Massachusetts, and Eisai, headquartered in Tokyo, Japan.

“Starting as early as six months, across all time points, the treatment showed highly statistically significant changes in [dementia severity] from baseline compared to placebo,” the companies announced.

The news puts lecanemab — which is injected into a patient’s veins... 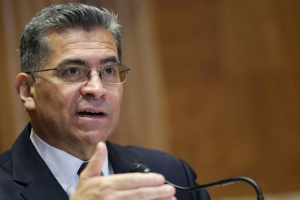 How Many COVID Deaths Will Chinese Protesters Accept?
The Atlantic