Tropical Storm Harvey, now downgraded from hurricane status, has caused substantial and deadly flooding in Texas, especially in the Houston area. The flooding is expected to continue and be “catastrophic” and potentially "historic." 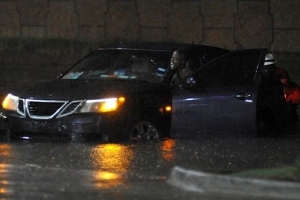 Officials here warned of “catastrophic” and potentially historic flooding in the nation’s fourth-largest city on Sunday morning, as Harvey continued to pummel Texas, dropping more than two feet of rain and causing dire flash floods. At least five people have been reported dead as a result of the storm, according to the National Weather Service.

More than 1,000 people have been rescued in flooded parts of Houston, as Tropical Storm Harvey continues to batter Texas with heavy rains.

Hurricane Harvey continued to pound southeastern Texas on Sunday with "catastrophic flooding" in Houston that led to at least one death and an airport shutdown caused by standing water on the runways.

News and Information about General News
Go ad-free! Support AllSides.
About these ads