On Thursday, Senate Democrats voted to begin debate surrounding the $1.9 trillion COVID-19 bill. The Senate voted 50-50 to advance the bill with Vice President Kamala Harris breaking the tie; no Republicans voted to take up the bill. This comes after a delay in approval from the Congressional Budget Office (CBO), which would make sure the Senate's bill complied with reconciliation rules -- a budget process that allows the bill to bypass a 60-vote filibuster. The Senate's version of the bill removes the $15 minimum wage increase, and lowers the cutoff for receiving stimulus checks to $80,000 for individuals and $160,000 for couples. The Senate will likely debate the bill for several days before it reaches a final vote. Then, the bill will return to the House, which will need to approve any changes made by the Senate.

The Senate's decision received coverage across the political spectrum.

From the Left
316
US Senate
By slimmest of margins, Senate takes up $1.9T relief bill
AP Politics & Fact Check 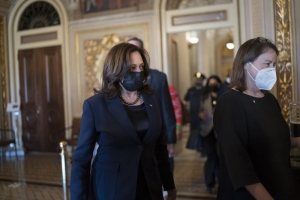 The Senate voted by the slimmest of margins Thursday to begin debating a $1.9 trillion COVID-19 relief bill, after Democrats made eleventh-hour changes aimed at ensuring they could pull President Joe Biden’s top legislative priority through the precariously divided chamber.

Democrats were hoping for Senate approval of the package before next week, in time for the House to sign off and get the measure to Biden quickly. They were encountering opposition from Republicans arguing that the measure’s massive price tag ignored promising signs that the pandemic and wounded economy were... 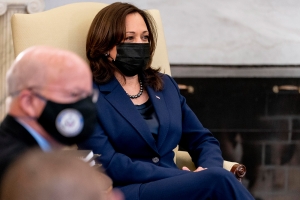 Debate on the bill, which would grant $1,400 stimulus checks to most Americans, is expected to drag into the weekend before a final vote.

“On this vote the yays are 50, the nays are 50. The Senate being equally divided, the vice president votes in the affirmative and the motion to proceed is agreed to,” Harris said. 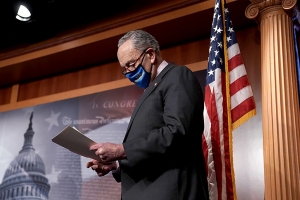 Senate Democrats voted on Thursday to take up a sweeping $1.9 trillion coronavirus bill, teeing off what's expected to be a days-long sprint to pass the legislation.

US deliveries of the “one-shot” Johnson and Johnson vaccine are set to drop by 85% next week, in a setback to the government’s vaccination campaign. The...

The good news: There are more shots available. The challenge is getting people to take them. When it comes to getting the coronavirus vaccine, Mississippi...

Covid-19 vaccinations are climbing. But familiar mistakes could lead to more misery
ANALYSIS

For more than a year, the US has battled a ruthless enemy: a novel virus that took no mercy on American communities, crippled hospital systems and took the...

Here's how experts know the COVID-19 vaccines are safe
ANALYSIS

As the push to vaccinate as many Americans as possible against COVID-19 picks up steam, questions about the shots’ safety have often hindered the campaign....

No region in the world spared as virus cases, deaths surge

Hospitals in Turkey and Poland are filling up. Pakistan is restricting domestic travel. The U.S. government will send more help to the state with the country’s...

The Pandemic’s Terrible Toll on Kids

When Victoria Vial’s Miami middle school shut down last spring and her classes went online, it felt like the beginning of an adventure. “I was in my pajamas,...

Joyce Ann Kraner is eager for the pandemic to end and for life to get back to normal. Kraner, 49, wants to be able to hug her mother, who lives in a nursing...

The U.K.’s vaccines advisory body said Wednesday that AstraZeneca PLC’s Covid-19 shot should preferably not be given to patients under 30 following concerns...

Economists had forecast a decline to 680,000 from the previous week’s 719,000. This is the second consecutive week in which initial jobless claims moved up in...

Brazil’s brutal surge in COVID-19 deaths will soon surpass the worst of a record January wave in the United States, scientists forecast, with fatalities...

‘It Can Be Confusing’: Fauci on Downward Trend in Texas with Relaxed Masking, Social Distancing