The Sierra Leone-flagged ship Razoni left the port city of Odesa for Lebanon carrying 26,000 metric tons of corn. A deal negotiated by the United Nations and Turkey was signed by Ukrainian and Russian officials on July 22, and is expected to release a large volume of Ukrainian agricultural products for trade amid a growing food security crisis. Grain shipments from Ukraine, one of the world's largest exporters, have been stalled since Russia invaded the country in late February.

The Turkish Ministry of Defense said on Monday that other ships will also be dispatched from Ukrainian Black Sea ports in line with the deal. Ukraine’s Minister of Infrastructure Oleksandr Kubrakov praised the deal and first shipment as "a colossal success in ensuring global food security." Kremlin spokesman Dmitry Peskov said the ship’s departure was "very positive" and would help test the "efficiency of the mechanisms that were agreed during the talks in Istanbul."

News sources across the political spectrum, especially on the left and center, highlighted the news prominently Monday. 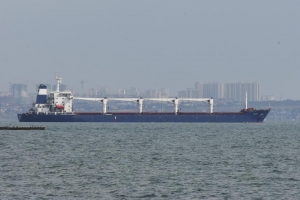 The first ship carrying Ukrainian grain set out from the port of Odesa on Monday under a deal brokered by the United Nations and Turkey that is expected to release large stores of Ukrainian crops to foreign markets and ease a growing food crisis.

“The first grain ship since Russian aggression has left port,” said Ukraine’s Minister of Infrastructure Oleksandr Kubrakov on Twitter, posting a video of the long vessel sounding its horn... 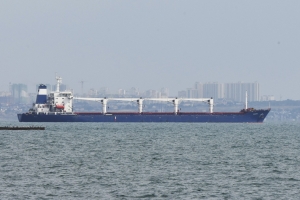 The first ship carrying grain from Ukraine left a port in the southern city of Odesa Monday, after months of Russian blockade helped fuel a mounting global food crisis.

The breakthrough follows a United Nations-backed deal between Kyiv and Moscow last month and while intense fighting continues in the east and the south. The departure of the first shipment will raise hopes that the impact of the war — now five months old — might be eased for millions facing hunger and poverty across the world, though doubts over Russia's commitment to any deal will continue.... 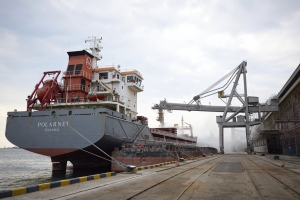 The Sierra Leone-flagged ship Razoni departed the port city of Odesa on Monday carrying 26,000 metric tons of corn bound for Lebanon, according to authorities. A deal brokered by the United Nations and signed by Ukrainian and Russian officials in Turkey on July 22 is expected to release a large volume of Ukrainian agricultural products to foreign markets and ease a growing food security crisis. The Turkish Ministry of Defense said on...