Over 1 million people have died from COVID-19 as of Tuesday, with worldwide cases topping 33.4 million. One fifth of the deaths, over 200,000, were in the United States. COVID-19 has also killed 142,000 in Brazil, 96,000 in India, and 76,000 in Mexico. According to Reuters, the virus kills 5,400 people per day, and 226 people per hour. Furthermore, the rise in deaths has accelerated, doubling from 500,000 in the last three months. Public health experts from multiple countries have warned of new spikes in cases, with WHO Regional Director for Europe Dr. Hans Kluge saying that this should be a “wake-up call” to those with “quarantine fatigue.”

There were no major differences in news coverage across bias ratings. Some coverage in outlets on all sides focused on different aspects of the story, such as the firsthand experiences of public health workers. Coverage in left- and center-rated outlets often featured graphs and other data visualizations.

From the Left
13320
Coronavirus
Coronavirus has killed 1 million people worldwide. Experts fear the toll may double before a vaccine is ready
CNN (Web News) 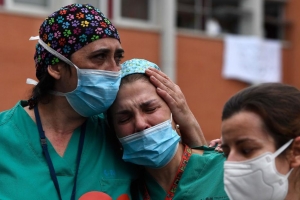 More than 1 million people have died from the coronavirus worldwide, marking another milestone in the pandemic's brief but devastating history.

The death toll from the coronavirus, which causes Covid-19, now stands at 1,000,555, according to data from Johns Hopkins University.
The grim tally has been reached in less than nine months since the first death caused by the coronavirus was confirmed by Chinese authorities in the city of Wuhan.
Since then, the virus has disrupted the everyday lives of billions of people around the globe and caused... 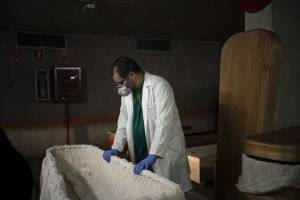 Joginder Chaudhary was his parents’ greatest pride, raised with the little they earned farming a half-acre plot in central India to become the first doctor from their village.

For the coronavirus, though, he was just one more in a million.

After the virus killed the 27-year-old Chaudhary in late July, his mother wept inconsolably. With her son gone, Premlata Chaudhary said, how could she go on living? Three weeks later, on Aug. 18, the virus took her life, too — yet another number in an unrelenting march toward a woeful... 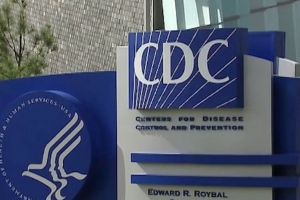 There have been over 1 million coronavirus-associated deaths worldwide since the illness was first reported in Wuhan, China, in late 2019, according to Johns Hopkins University data.

In January, as the virus began to spread outside of the country's borders, the World Health Organization (WHO) declared it a global health emergency, but it wasn’t officially deemed a global pandemic until March.

Since then, the world has been watching as companies race to develop a vaccine, and numerous countries issued lockdowns in hopes of containing the virus’ spread and cutting down...

COVID Hit the World Series in Game 6. What if the Rays Had Forced a Game 7?
ANALYSIS

President Donald Trump's son-in-law and senior adviser Jared Kushner boasted in mid-April about how the President had cut out the doctors and scientists...

On the campaign trail, President Donald Trump has taken to calling COVID-19 a “fake news media conspiracy.” But the numbers don’t lie: Daily new cases are...

Dr. Anthony Fauci, the nation’s top infectious disease official, will oversee most of the ongoing COVID-19 vaccine trials in the U.S., but not that of the...

President Trump acknowledged Tuesday that an agreement on a coronavirus relief stimulus package would not materialize until after Election Day, but predicted...

Older people and Republicans are most likely to share Covid-19 stories from fake news sites on...
DATA

Since March, a group of scholars from Northeastern, Harvard, Rutgers, and Northwestern have been working to understand how social behaviors affect transmission...

The average number of new daily cases of the coronavirus in the United States hit another record on Monday as 36 states reported worrying rises in the number...

How are we going to get control of this pandemic? We’re not, says President Trump’s chief of staff

That’s White House chief of staff Mark Meadows in a heated exchange on CNN over the coronavirus and Vice President Mike Pence’s actions in the wake of his...

Coronavirus relief likely on pause until after election as Trump promises 'best stimulus...

The odds of Congress striking a coronavirus relief deal before the November election dimmed considerably this week after the Senate left Washington for their...

The Food and Drug Administration has officially approved Gilead Sciences' antiviral drug remdesivir for use in treatment of coronavirus, according to Fox...