Gerrymandering Ruling a Victory or Loss?

On Thursday, the Supreme Court ruled that federal courts cannot prevent the process of political redistricting to let politicians choose their voters. Chief Justice John Roberts' completed the 5-4 majority vote, finding that "gerrymandering is unhealthy, but is nonetheless a state prerogative that the court has no power to correct." The Constitution does not award political parties or factions the right to hold a proportional number of seats.

People throughout the political spectrum had very different views on the ruling. Voices from the right celebrated; some labeled it a constitutional victory, saying that the justices had acted logically and alike to many who'd made similar rulings before them. Others downplayed the significance of the vote entirely. Those on the left admonished the Court, saying the decision would help fuel the hyperpartisanship that can occur as a result of competitive redistricting.

Gerrymandering Ruling a Victory or Loss?

From the Right
1184
Politics
How Much Does Gerrymandering Really Matter?
National Review 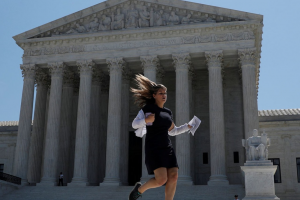 For Congress, not that much, since both parties do it.
On Thursday morning, a 5–4 Supreme Court decision closed the door on having federal courts police partisan gerrymandering. The Court’s decision left standing a Democratic gerrymander in Maryland’s House districts and a Republican gerrymander in North Carolina’s, both of which were openly partisan. The Court’s decisions are, predictably, reviving the ongoing debate over the centuries-old practice of gerrymandering: state legislatures drawing congressional and state legislative districts to favor their own political party. Partisan gerrymandering is political self-interest in its... 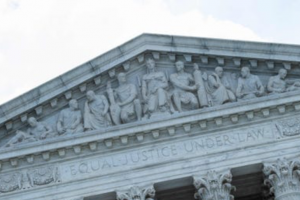 The Supreme Court has definitively declined to involve federal courts in the Game of Thrones that is redistricting, ruling that conflicts over partisan gerrymandering are best left to politicians and the electoral process.
The two cases resolved Thursday surely presented the strongest imaginable temptation to impose the judicial will on the wheel of politics: North Carolina Democrats and Maryland Republicans alleged that redistricting plans not only discriminated against them based on their political views, they also handicapped their First Amendment associational freedoms. 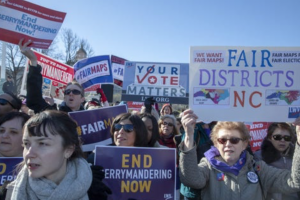 Recent years have been hard on a Supreme Court trying to maintain its reputation for impartial justice. Time and again, the justices have jumped into cases that advantage one major political party at the expense of the other.
In virtually all of them — on issues ranging from the 2000 Florida recount to money in elections to restrictive voter ID laws to modern interpretations of the 1965 Voting Rights Act — the court has found a rationale for doing the Republican Party’s bidding.

Expanding the Supreme Court, an increasingly popular reform among some progressive activists, is not politically costly for Democrats, according to an academic...

One possible version: What if the Court had 188 justices? Sen. Bernie Sanders (I-VT) came out against court-packing as a way to end Republican dominance of...

What if we have to destroy the judiciary in order to save democracy? At a campaign stop in Iowa, Democratic presidential candidate Tom Steyer embraced a...

Law Professor Jonathan Turley, who was called before Congress this week by Republicans, argues that Donald Trump should not be impeached for using the courts...

President Trump asked the Supreme Court on Thursday to stop a prosecutor’s investigation of his personal finances, a bold assertion of presidential power that...

At Impeachment Trial, Chief Justice Roberts May Have More Prestige Than Power

When the Senate impeachment trial of President Trump opens, the man in the center chair will be Chief Justice John Roberts. His role is spelled out in the...

Supreme Court Chief Justice John Roberts has made a point of defending the independence and impartiality of the nation’s highest court. That stand will be...

Chief Justice John Roberts has tried to prevent the Supreme Court from being seen as just another political body, but when he presides over President Trump’s...

Guns: when and how to regulate them. It's one of the biggest issues across the country. But the U.S. Supreme Court has rarely weighed in on the issue. In...

It’s Time for Term Limits on the Supreme Court
OPINION

They have broad bipartisan support, and they might reduce the hysteria of nomination battles. Murmurs of concern swept through Washington, D.C., Friday night...

When President Obama unilaterally changed immigration policy after repeatedly and correctly insisting that he lacked the constitutional power to do it, he said...