Gallagher Found Not Guilty on All Counts Except One

Navy Special Operations Chief Edward Gallagher has been found not guilty on multiple counts, including premeditated murder, related to the death of a captive Islamic State soldier in Iraq in 2017.

Gallagher was found guilty of taking unofficial pictures with the corpse of the dead ISIS soldier. Gallagher's attorneys suggest that his arraignment and legal process has been part of a larger scheme by his subordinates to mutiny. Military juries, unlike civilian juries, need only a two-thirds majority to reach any decision; meaning that only five out of the seven jurors needed to concur to make a decision. Voices on both the left and right sides of the media referenced the fact that key prosecution witness Corey Scott — a Navy SEAL medic — changed his story during the course of the trial.

The maximum penalty for one offense of posing for unofficial pictures with a dead body is four months imprisonment. During the trial, it was revealed that members of Gallagher's unit regularly and deliberately posed for pictures with dead bodies for trophy. It is unknown as to what the repercussion of the verdict will be on military policy.

Gallagher Found Not Guilty on All Counts Except One 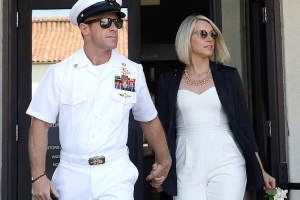 Navy SEAL Eddie Gallagher has been found not guilty of murder and attempted murder after a two week war crimes trial.

The jury took less than a day to reach a verdict. Gallager, 40, was convicted of posing with the ISIS fighter's corpse but is expected to walk free from court on Tuesday.

The maximum sentence for the crime is four months and he spent longer than that in confinement awaiting trial before being freed by President Trump in March.

Gallagher's attorney said the trial was a... 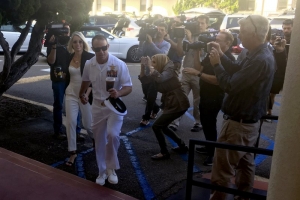 SAN DIEGO, July 2 (Reuters) - A U.S. Navy SEAL platoon leader charged with committing war crimes in Iraq was acquitted by a military jury on Tuesday of murder and all other counts except for unlawfully posing with the corpse of a captive Islamic State fighter.

The seven-member jury deliberated for about nine hours before delivering its verdict in the court-martial of Special Operations Chief Edward Gallagher, a decorated career combat veteran whose case had drawn the interest of U.S. President Donald Trump. 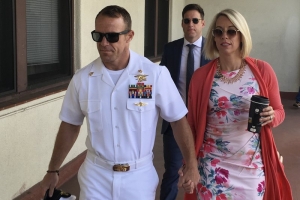 SAN DIEGO (AP) — A military jury acquitted a decorated Navy SEAL of premeditated murder Tuesday in the killing of a wounded Islamic State captive under his care in Iraq in 2017.

Special Operations Chief Edward Gallagher was cleared of all charges except for posing for photos with the dead body of the captive in a verdict that is a major blow to military prosecutors. It took the jury less than two days of deliberations to reach its verdict.

The Flip Side
Justice