2020 presidential hopeful Tulsi Gabbard (D-HI) and her team of lawyers are demanding Hillary Clinton retract comments in which she accused Gabbard of acting as a Russian asset and pondering a third-party run. Gabbard's legal counsel wrote a letter to Clinton's team, saying the former Secretary of State knowingly defamed the 2020 candidate. 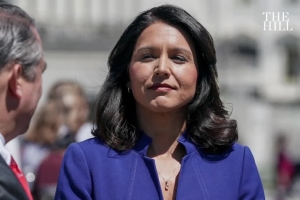 Lawyers representing Rep. Tulsi Gabbard (D-Hawaii) on Monday called on Hillary Clinton to retract her comments alleging that the 2020 presidential candidate was a favorite candidate of the Russians, accusing the 2016 Democratic nominee of defamation.

"Your statement is defamatory, and we demand that you retract it immediately," Gabbard's lawyer wrote in a letter, demanding that Clinton verbally retract the comments and post the retraction on Twitter.

Clinton made the remarks last month on the "Campaign HQ" podcast.

Lawyers for presidential candidate Rep. Tulsi Gabbard (D-Hawaii) are accusing Hillary Clinton of defamation for her assertion that “somebody who’s currently in the Democratic primary” is being groomed “to be the third-party candidate” and is “the favorite of the Russians.”

Gabbard’s lawyers, in a letter obtained by Politico’s Daniel Strauss, demanded that Clinton immediately retract comments she made last month to a podcast, calling the statements false and praising Gabbard as “a patriotic loyal American.” 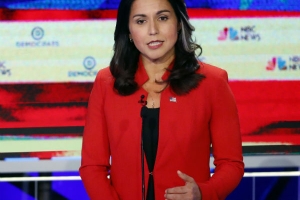 Lawyers for Rep. Tulsi Gabbard, D-Hawaii, are demanding that Hillary Clinton walk back on her claim that Gabbard's presidential campaign is backed by Russia.

"Your statement is defamatory, and we demand that you retract it immediately," a letter from Gabbard's lawyer reads, according to The Hill.

The lawyer requested that Clinton retract her comments both verbally and via Twitter.

"It appears you may now be claiming that this