At this year's Group of Seven meeting, Ukraine's war and China's global influence are the main focus.

President Joe Biden joined the leaders of the other G7 countries — Canada, Japan, Germany, Italy, France and the U.K. — for the group's annual 3-day summit in the German Alps. The group met virtually with Ukrainian President Volodymyr Zelenskyy, who reportedly told the group that he wants the war in Ukraine to end by the end of 2022. The U.S. is also expected to announce additional artillery support and more advanced surface-to-air missile systems to Ukraine. In addition, the group reportedly discussed a deal to cap the price of Russian oil.

The leaders also agreed to raise $600 billion in private and public funds over the next five years for infrastructure in developing countries to counter China's multitrillion-dollar "Belt and Road" global infrastructure project. Biden committed to raising $200 billion in grants, federal funds and private investment for the project.

The G7 summit made headlines across the political spectrum, with many focusing on the group's talks with Zelenskyy and plan to compete with China's global trade infrastructure. Reports on all sides suggested that to effectively combat Russia's invasion of Ukraine, G7 leaders would need to figure out how to alleviate energy supply issues and high prices as many countries try to end dependency on Russian fuel exports. 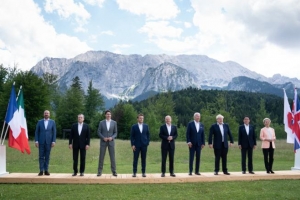 Ukrainian President Volodymyr Zelensky told G7 leaders during a virtual meeting Monday that he wants the war in Ukraine to end by the end of 2022, according to a source familiar with his remarks, as leaders worked to starve Russia of its oil revenues and mitigate the economic fallout of the conflict.

The dual missions -- sustain support for Ukraine while easing economic pressures at home -- have defined this year's summit of leading democracies, held high in the Bavarian Alps. While largely united, the leaders are all facing their own political imperatives to see... 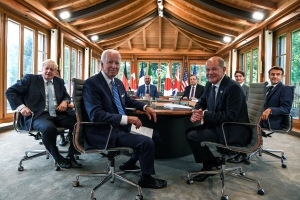 U.S. President Joe Biden and other G7 leaders relaunched the newly renamed "Partnership for Global Infrastructure and Investment," at their annual gathering being held this year at Schloss Elmau in southern Germany.

Biden said the United States would mobilize $200 billion in grants, federal funds and private investment over five years to support projects in... 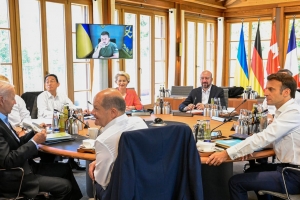 The Group of Seven economic powers are planning a continued commitment to supporting Ukraine, with the U.S. preparing to purchase an advanced surface-to-air missile system for the country. The leaders are set to agree to pursue a price cap on Russian oil, raise tarrifs on Russian goods and impose new sanctions on officials supporting Russia's war on Ukraine.

The G-7 leaders met in the German Alps and spoke virtually with Ukrainian President Volodymyr Zelenskyy. During Monday's portion of the three-day annual summit, the leaders focused on Ukraine.