Trump to Speak at CPAC

Former President Donald Trump has announced that he will speak at the Conservative Political Action Conference (CPAC) on Friday.

While it is unknown whether or not Trump will run again in 2024, Trump advisors expect him to use the speech to say he is "still in charge" of the GOP and to criticize President Joe Biden's immigration policy.

Trump to Speak at CPAC 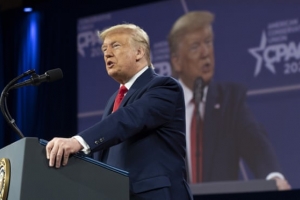 Donald Trump will reportedly tell the Conservative Political Action Conference in Florida this week he is the man to drain the Washington swamp – as Republicans’ “presumptive 2024 nominee”.

Republicans aim to purge anti-Trump officials from state parties in sign of battles ahead
Read more
Trump will address CPAC on Sunday, his subject the future of the Republican party. On Monday, citing anonymous sources, the news site Axios reported his plan to assume the mantle.

An unnamed “longtime adviser” was quoted as saying Trump’s speech to the rightwing... 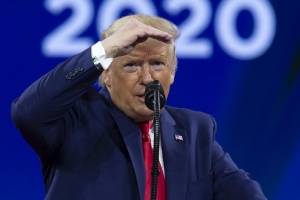 Trump is scheduled to speak on the afternoon of Feb. 28, the final day of the conference, to be held in Orlando, Florida.

"Look for the 45th President to take on President Biden’s disastrous amnesty and border policies," a source familiar with Trump's plans told the Washington Examiner.

The former president will...

Read full story
See full media bias rating for Washington Examiner
From the Center
1184
Politics
Trump plans to use his CPAC speech as a 'show of force' to exert control over the GOP, report says
Business Insider 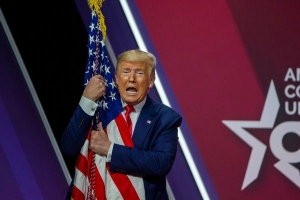 Former President Donald Trump plans on using his upcoming speech at the Conservative Political Action Conference (CPAC) as a "show of force" to exert control over the Republican Party, Axios reported.

Trump is due to speak at the event on Sunday — his first public speech since leaving office.

One of his longtime advisors told Axios' Mike Allen that his speech will be a "show of force," and intended to show that he still rules over the GOP, even though he is no longer president and has been barred from...

It was bound to happen, and I'm honestly surprised it took this long: the first Very Online woman is facing US Senate confirmation. And she may not make it...

Republicans have criticized her tweets, but Democrats say former President Donald J. Trump’s were much worse as they assail what they call a double standard...

McConnell says he would 'absolutely' support Trump as 2024 nominee

Five things to watch at CPAC

Republicans are gathering in Orlando this week for the Conservative Political Action Conference (CPAC), an annual event that allows grassroots activists,...

Two of President Biden’s Cabinet nominees are slamming into confirmation hurdles on Capitol Hill, testing the White House’s ability to navigate a tenuous...

Republicans are “becoming the party of blue-collar Americans” so long as the party continues with a populist-nationalist agenda, new analysis reveals....

Prominent Democrats in Washington are weaponizing identity politics to defend some of President Biden's most controversial Cabinet nominees from criticism...