Adams called the migrant busing “horrific” because, he said, some migrant families “were forced on the bus with the understanding that they were going to other locations.” On Sunday, Adams greeted a bus expected to contain about 40 migrants, but only 14 got off, with the rest apparently leaving the bus before it arrived in New York City.

Texas began sending migrants to New York on Friday after sending thousands to Washington, D.C. over the previous four months. Like D.C. Mayor Muriel Bowser, Adams also requested federal support to manage the influx of migrants. In a Friday statement, Abbott called New York an “ideal destination” for migrant buses, saying he hoped Adams “follows through on his promise of welcoming all migrants with open arms so that our overrun and overwhelmed border towns can find relief.”

While coverage from the right often said the migrants had arrived in the U.S. illegally, coverage from the left often noted that many of the migrants were seeking asylum, which is legal. Meanwhile, the New York Post (Lean Right bias) said New York City was “crime-riddled” and “beset with quality-of-life concerns,” and The New York Times (Lean Left bias) framed migrants as being sent “to make a political point.” 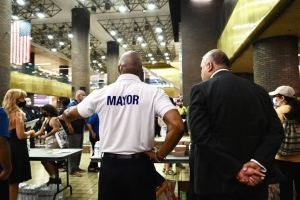 New York City officials estimated that more than 4,000 immigrants seeking asylum have arrived in the city from Texas, including busloads of immigrants who are at the center of a political showdown initiated by Gov. Greg Abbott.

As part of what has been dubbed Operation Lone Star, Abbott included New York alongside Washington, D.C. as destination cities for chartered buses filled with asylum-seeking immigrants, many of whom are attempting to reach other cities. Democrats, including those from the targeted cities, have described the initiative as a dangerous political stunt. 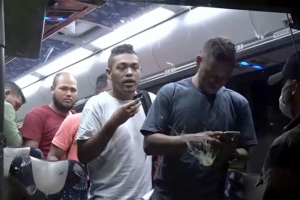 Even border-crossers are too scared of the crime-riddled Big Apple.

Mayor Adams was on hand for the cameras Sunday to greet the city’s latest busload of migrants being dumped here from Texas — only to be stunned to learn that the vast majority had  gotten off before they made it.

Hizzoner said the immigrants likely bailed out early  because of their “fear” of the city. 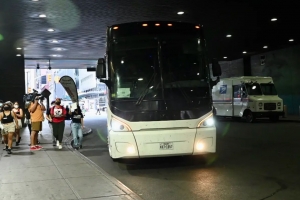 When a second busload of migrants arrived in New York City from the Texas border on Sunday, Mayor Eric Adams was there to greet them — and again slam Gov. Greg Abbott for the move.

“This is horrific, when you think about what the governor is doing,” Adams said at the Port Authority bus terminal, where 14 migrants were dropped off early Sunday morning, Politico reported.

Officials had expected 40 people to be on the bus, but Adams said some migrants appear to have gotten off at other stops along the route. Adams...