Manufacturers of new cars and light trucks will be required to achieve a fleet average of 40 miles per gallon by 2026, according to Environmental Protection Agency standards finalized Monday.

Some outlets across the spectrum reported a different number — 55 miles per gallon — likely because they used a different figure from the EPA’s regulatory update document; the “40 miles per gallon” figure is adjusted for “real-world impacts” on emissions, like “high speed driving, air conditioning usage, and cold temperatures.” The new rules specify that cars built for model years 2023-2026 must raise fuel efficiency 5-10% each year to meet a 161 grams per mile standard for carbon dioxide emissions.

Coverage from the left tended to highlight climate change and the Trump administration’s looser emissions rules. Some coverage from the right framed the rules as “strict.” Headlines differed in describing the standards; The New York Times (Lean Left) called them “strengthened limits on pollution,” and Fox News (Right) called them “tougher new fuel economy rules.” Most headlines said the rules “raised” or “tightened” standards. 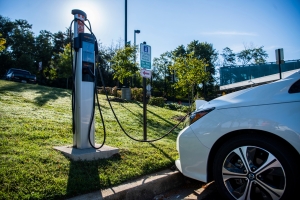 The EPA on Monday announced landmark new vehicle emission standards likely to serve as a centerpiece of the Biden administration’s climate agenda, even as Democrats' struggles to pass a budget reconciliation package create challenges for the auto industry to comply with the new standards.

Administrator Michael S. Regan announced the standards during an event in the EPA courtyard, flanked by several electric vehicles and joined by clean air advocates. Regan said the agency is responding to scientific evidence that calls for reducing the greenhouse gas emissions fueling climate change.

The Environmental Protection Agency on Monday will tighten fuel emissions standards for cars and light trucks to 40 miles per gallon by the 2026 model year, replacing the looser Trump-era standards.

The new standards will save consumers money on fuel and prevent billions of tons of planet-warming carbon dioxide from being released into the atmosphere.

The EPA said that by 2026, the requirements will be "the most ambitious greenhouse gas standards ever set for the light-duty vehicle sector in the US."

The EPA has finalized new fuel economy rules for the years 2023 to 2026 that set tougher standards than those established during the Trump administration.

The new target raises the fleet average fuel economy requirement by 25% from 32 mpg to 40 mpg, according to Reuters. President Biden had previously proposed a 38 mpg requirement in August and has encouraged automakers to transition their lineups to 50% electric vehicles by 2030.

John Bozzella, president and CEO of the Alliance for Automotive Innovation, which represents most consumer automakers, called the plan "aggressive" and said meeting the...

News and Information about Environment
Go ad-free! Support AllSides.
About these ads