The economy added 196,000 jobs in March, rebounding from a weak February and beating economists' expectations. The unemployment rate remained unchanged at 3.8 percent. 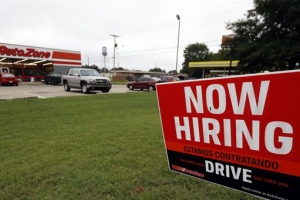 The Labor Department reported Friday morning that the U.S. economy added 196,000 jobs in March, showing a rebound from the February report and beating economists’ predictions.

The unemployment rate of 3.8 percent remained the same.

The US economy added 196,000 jobs in March, up from 33,000 the prior month. Despite a slight upward revision from the original estimate, February hiring remained the weakest since September 2017.
Meanwhile, the unemployment rate remained at 3.8%, a level near historic lows.

While March hiring was robust, it brings the first-quarter average to 180,000 jobs created per month, down from 223,000 per month on average in...

The unemployment rate was unchanged at 3.8%, the Labor Department said Friday.

Job gains for January and February were revised up by a modest 14,000.

After severe, weather-related swings in employment early this year, economists largely anticipated a return to normalcy in March. If anything, Goldman Sachs reckoned below-average snowfall would bolster job gains by about...

Read full story
Some content from this outlet may be limited or behind a paywall.
See full media bias rating for USA TODAY
More Stories »
Economy and Jobs, Jobs Report
Go ad-free! Support AllSides.
About these ads

Senators painted a confusing picture on the status of infrastructure talks as they left D.C. for the weekend, with some claiming major progress and others...

Consumer prices roared higher last month, rising at their fastest pace in decades. Inflation rose 5% in the 12-months ending in May, the Bureau of...

The most recent inflation figures are unlikely to rattle the Biden administration or Federal Reserve. Prices rose by 5 percent in May compared with a year...

Behind the May jobs report: Where are the workers?
OPINION

Faced with a sudden explosion in demand as the economy reopens, employers are itching to hire. Companies are publicizing wage hikes, one-time bonuses, better...

An inflation storm is coming for the U.S. housing market
ANALYSIS

Fast-rising housing costs have helped to push inflation to a 13-year high. But the way that government statisticians track the price of consumer goods may be...

Inflation is hotter than expected, but it looks temporary and likely won’t affect Fed policy yet
ANALYSIS

Consumer prices jumped more than expected in May, but the surge in inflation looks to be temporary and should not push the Federal Reserve to tighten...

U.S. Inflation Is Highest in 13 Years as Prices Surge 5%

Consumer prices rose rapidly in May, reflecting a surge in demand and shortages of labor and materials. U.S. consumer prices continued to climb strongly in...

A key inflation gauge that revealed consumer prices rose at their fastest pace in decades last month could prompt the Federal Reserve to start laying...

From his beach home in Delaware, President Joe Biden did what career politicians do best – he tried putting a positive spin on bad news. After yet...

Job openings soared to a record high at the end of April, the labor Labor Department said Tuesday, adding to fears about unfulfilled demand for workers. The...

The global economy is on track to grow at the fastest post-recession pace in 80 years, thanks to steady – but uneven – vaccine distribution, the...