A commission led by Betsy DeVos will rethink Obama-era guidelines that recommend schools decrease suspension rates for minority students. Supporters of the directive say that it protects minorities from disciplinary discrimination, while detractors say that it's made classrooms less safe. 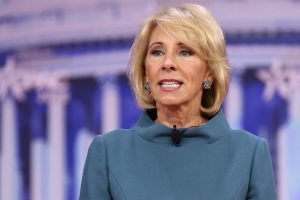 As part of his new effort to focus on school safety in response to the mass shooting at Marjory Stoneman Douglas High School, President Trump has returned to an old punching bag: his predecessor. Trump's school safety commission will investigate an Obama policy originally meant to help minority students avoid disciplinary discrimination. The policy, despite its success in some areas, has come under fire in conservative circles because of a perception that it lets dangerous individuals avoid punishment.

The Trump administration is being accused of racism for targeting an Obama-era directive compelling schools to ease up on discipline for minority students — even though the policy has made life more difficult for kids, including minorities, stuck in increasingly unruly classrooms.

Read full story
Some content from this outlet may be limited or behind a paywall.
See full media bias rating for Washington Times
More Stories »
Education
Go ad-free! Support AllSides.
About these ads

As the end of pandemic relief for student debt looms, progressives are pushing the White House for clarity on its plans for cancelling some student debt....

The cold truth about hot lunch: School meal programs are running out of food and workers

Square pizza and chicken tenders suddenly get swapped for meatloaf and zucchini coins. American schoolchildren and lunch ladies grimace. And now the federal...

New York City’s classrooms reopened on Monday to roughly a million children, most of whom were returning for the first time since the United States’...

Some teachers at the Dallas Independent School District woke up to an email this week asking them to rat out any fellow employees for supposedly promoting so-...

A Texas school district has once again become the center of controversy after an administrator reportedly instructed teachers to provide students with "...

Should there be special programs for gifted students?

California will be the first state to require schoolchildren get the COVID-19 vaccine, Gov. Newsom...

California is the first state in the country that will require schoolchildren to get vaccinated against COVID-19, Gov. Gavin Newsom announced Friday. The...

Student Loan Forgiveness Won’t Be Available To These Borrowers

Biden plan seeks to expand education, from pre-K to college

As Democrats push ahead with President Joe Biden’s $3.5 trillion rebuilding plan, they’re promising historic investments across the arc of an education —...

U.S. Attorney General Merrick Garland has directed the FBI to work with law enforcement to protect school board members, teachers, and other public school...

House Minority Leader Kevin McCarthy took aim at a new Department of Justice policy intended to crack down on alleged "threats of violence...