On Tuesday, Senate Democrats will offer a scaled-back version of a Biden administration proposal requiring financial institutions to report more information to the Internal Revenue Service (IRS) on bank accounts with more than $600 in annual deposits or withdrawals.

The new plan will boost that amount to $10,000 and will exempt wage income.  Banks already report interest earned in their customers' accounts to the IRS, but they would now report annually on deposits and withdrawals as well. Many banks, conservatives and libertarian groups raised privacy concerns about the original proposal. The Biden administration is expected to support the new plan, which could provide new revenue to pay for the Democrats' $3.5 trillion spending bill and potentially allow the IRS to better target tax evaders. Democrats say the measure would focus on wealthy Americans, not small accounts.

The news was covered by outlets across the spectrum, but not very prominently. Right-rated outlets have offered more coverage of the plan in general over the past few weeks, and many right-rated voices have decried the proposal as government overreach. 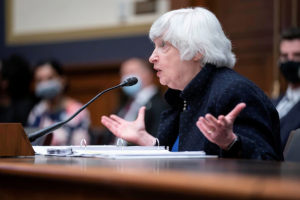 Senate Democrats on Tuesday will unveil a scaled-back version of a Biden administration proposal to crack down on wealthy tax cheats after conservative groups and the bank industry raised major privacy concerns, three people with knowledge of the coming announcement said.

Initially, the Department of Treasury and Senate Democrats had proposed requiring financial institutions to provide the Internal Revenue Service with additional information on bank accounts with more than $600 in annual deposits or withdrawals.

After a backlash, the new proposal will instead require the provision of additional information for accounts with...

Read full story
Some content from this outlet may be limited or behind a paywall.
See full media bias rating for Washington Post
From the Center
835
Economic Policy
Senate Dems to propose narrowing scope of IRS reporting rule amid backlash
The Hill

Senate Democrats on Tuesday are expected to roll out an IRS enforcement proposal that is narrower in scope than a version unveiled earlier this year by the Biden administration, following criticism from Republicans and banking groups.

The Biden administration had proposed requiring financial institutions to report more information about bank accounts to the IRS, in cases where the accounts had more than $600 in withdrawals and deposits in a year. Senate Democrats are planning to increase that threshold to $10,000 and exempt wage income, a Democratic aide told The Hill.

The White House is contending opposition to its tax enforcement proposals, targeting amounts as small as $600, is based on banks being too lazy to deal with the extra paperwork.

The tax enforcement measures are aimed at helping pay for President Joe Biden's social welfare and climate spending package. The focus is on the wealthy rather than people with small bank accounts, according to White House press secretary Jen Psaki.

"It should not be lost on anyone that the loudest opposition to these proposals and the biggest ad spending against...

News
Inflation at 30-year high. Where it goes next is (partly) up to you.
Christian Science Monitor

News
US must rethink attitude to parental leave, Pete Buttigieg says
The Guardian

News
Inflation in U.S. Builds With Biggest Gain in Prices Since 1990
Bloomberg

Analysis
The World ‘Has Found a Way to Do This’: The U.S. Lags on Paid Leave
New York Times (News)