Republicans and Democrats in Congress have warned the White House against terminating special counsel Robert Mueller, with several senators sponsoring a bill that would prevent President Trump from doing so. GOP leaders feel that preventive action at this point is unnecessary, however, with Republican Sen. Mitch McConnell stating, "I haven’t seen clear indication yet that we needed to pass something to keep him from being removed, because I don’t think that’s going to happen." 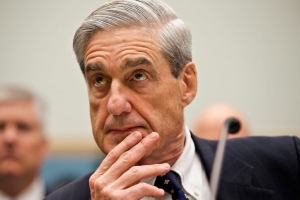 Democrats warned Tuesday of a “constitutional crisis” if President Trump were to fire special counsel Robert Mueller, and demanded Congress move quickly to approve legislation that would take the decision out of the president’s hands.

President Donald Trump has been advised he has authority to fire special counsel Robert Mueller, a White House spokeswoman said, as top Republicans in Congress warned that doing so may put his presidency at risk.

Senate Republican leaders sharply warned President Trump not to fire Robert S. Mueller III on Tuesday — but they once again stopped short of embracing legislation to protect the special counsel.

The National Association of the Deaf and five deaf Americans have sued the White House, arguing that the lack of a sign language interpreter at President Trump...

Sometimes, the ACLU is all that has stood between a democracy and a Trump dictatorship
OPINION

As soon as he took office, Donald Trump began trying to dismantle the U.S. Constitution. First came his ill-conceived “Muslim ban,” followed by his ill-...

Days after entering office, President Donald Trump made a promise: He would eliminate two rules for every one signed into existence. Since then, he has...

Where Does Joe Biden Go to Get His Apology?
ANALYSIS

Well, it happened and President Trump went there, suggesting maybe we delay the election. As Charlie Sykes observes in his daily newsletter, this is just a “...