Democrat Ralph Northam won Virginia's closely-watched governor's race tonight over Republican candidate Ed Gillespie, giving Democrats their first major victory since President Trump took office. This election, along with the governor's race in New Jersey, has been watched closely as many people viewed it as a test of President Trump's impact on politics nationwide. 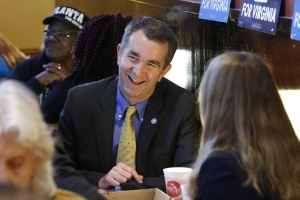 Lt. Gov. Ralph Northam (D) won the Virginia governor’s race in a blowout Tuesday, fending off a potential gut punch for his party and giving Democrats a jolt of momentum ahead of the 2018 midterms.

Democrat Ralph Northam was projected to win Virginia’s race for governor Tuesday over Republican Ed Gillespie, as Democrats appeared headed for a big night across the board in races for lieutenant governor, attorney general and several key seats in the House of Delegates, based on exit polls and early returns.

Joe Biden: I want your vote to become your next president — here’s what I will do for you and our...
OPINION

On Day One, I’ll mount an aggressive approach to control this virus and get us back to our lives. Across our nation today, there are nearly 230,000 empty...

“I want to feel hopeful about Joe Biden’s chances this year, but I just can’t,” my neighbor confessed to me, as we stood in line outside a coffee shop. What...

With early voting totals smashing records on a daily basis, Democrats are leading with a key constituency — those who did not, or could not, vote in 2016....

The greatest commandment has guided my politics
OPINION

In the Gospel of Matthew, Jesus is asked, “Teacher, which is the greatest commandment in the law?” “‘Love the Lord your God with all your heart and with all...

Media election planners prepare for a night of mystery

NEW YORK (AP) — This coming weekend, CNN’s Sam Feist will distribute to his staff copies of the testimony news executives gave to Congress when they tried to...

More than 230 election-related federal lawsuits have been filed already. A look at each state.

In Alabama, a Black man with Parkinson's disease and asthma asked a court to allow curbside voting but was turned down by the U.S. Supreme Court. In Florida,...

There are five days until Election Day. President Trump continues his ambitious campaign schedule, while Joe Biden, his Democratic rival, is slated to hit the...

Most pollsters show Democratic nominee Joe Biden with a sturdy and stable lead over President Trump at a time when tens of millions of people have already...

How many Americans have voted early so far?

Early voting is exactly what it sounds like - it's where people are allowed to vote before the scheduled election day. This can be either in-person at early...

Within The Early Voting Boom, Youth Turnout Seems To Be Surging

When Sam Peterson enrolled at Morningside College in Sioux City, Iowa, he found the college experience mind-boggling. So too, he says, was figuring out how to...

Donald Trump: Reelect me and I will continue to deliver safety, prosperity and opportunity for all...
OPINION

A vote for me is a vote for jobs, safety, rule of law, lower taxes, protection of your Second Amendment, and freedom. Four years ago, Americans elected me...

Yes, Media Are Rigging The Election Against Half The Country. Here’s How
OPINION

Even if Donald Trump had lost the 2016 election, instead of won it in a surprise, the media’s coverage of his campaign and supporters would have been a...

Republicans have closed Democrats' early voting lead in Florida by about 300,000 votes since early, in-person voting began and only trail in the state by 3...

Pennsylvania is the state most likely to decide next week's presidential election, but a Supreme Court ruling this week has all but guaranteed that we won't...