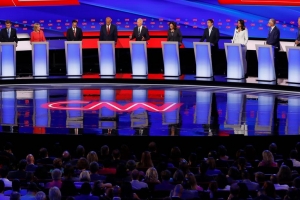 Democratic presidential hopefuls will once again crowd on stage at their third debate, set to air on ABC News on Thursday. Ten candidates will be on hand to have their say. Voters are not keen on the idea.

“Most voters — including a majority of Democratic primary voters — still believe there will be too many candidates on the stage,” reports a new Politico/Morning Consult poll released Wednesday.

It found that 54% of all voters say that the number of White House hopefuls “is more than enough.” The survey found...

On Thursday night, the third Democratic debate will be the first to put all the major Democratic candidates on one stage together. But among the 10 candidates, only three have been consistently registering frontrunner status in the polls: Former Vice President Joe Biden, Sen. Bernie Sanders, and Sen. Elizabeth Warren.

And that’s been pretty consistent for several months now.

Between the two rounds — and four nights — of debates, there have been a lot of break out moments for those three and some of the other seven candidates who... 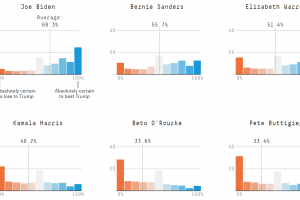 It’s time for the third Democratic debate! And a lot has changed since the first debate in June. Back then, there was only one clear polling front-runner, former Vice President Joe Biden, and the size of the field was daunting, with more than 20 “major” candidates. Now, though, the field has winnowed a bit, and the polls show three to five candidates vying for the lead. Biden is still out in front, but he’s now followed more closely by Elizabeth Warren and Bernie Sanders, with Kamala Harris and Pete Buttigieg...