Countries struck a deal at the United Nations' COP27 conference to have rich nations help poorer countries pay for damage and losses caused by the effects of climate change, while failing to reach an agreement on carbon emissions and fossil fuels.

For Context: More than 200 nations agreed to the "loss and damage" fund. It's currently unclear how much the U.S. and other nations will contribute. Meanwhile, a deal to phase out fossil fuels entirely was blocked amid opposition from China and Saudi Arabia, two of the world's top oil-producing countries. In 2009, richer countries agreed to provide developing nations with $100 billion annually for climate action by 2020, but ended up falling short.

Where News Coverage Aligned: Few news sources framed the deal positively. Many framed it as questionable, but often for different reasons depending on their bias.

Where News Coverage Differed: Headlines from left- and center-rated sources often focused on what the deal didn't accomplish, and highlighted other climate goals that are being missed. A Washington Post (Lean Left bias) headline said "COP 27 leaves world on dangerous warming path," and Reuters (Center bias) said the deal came at the cost "of progress on emissions." Right-rated sources often framed the entire deal as flawed. An article from the Washington Times said the deal "frustrated the political left and right alike in the U.S." A Daily Mail (Right bias) headline highlighted how "gas-guzzling China WON'T have to pay into" the fund.

What is loss and damage and will rich nations pay for climate change?
BBC News 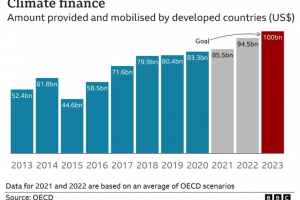 World leaders have reached a historic deal to give money to developing nations facing the effects of climate change.

The creation of a fund for "loss and damage" is seen as a breakthrough, but previous promises of payments are still to be met.

What do countries want money for?

Loss and damage: This money is to help developing countries recover from the effects of climate change they are already suffering.

For example, in the past 12 months alone the developing world has...

Liberals and conservatives are criticizing a U.N.-backed deal supported by the Biden administration for richer nations to pay reparations to poorer countries for the impacts of climate change.

Attendees of the COP27 climate summit held in Egypt went into overtime last weekend to establish a global “loss and damage” fund. The historic initiative calls for wealthier nations like the U.S. and its allies in Europe to compensate poorer nations that have been most affected by climate change but are among the lowest emitters of greenhouse gases.

The agreement has frustrated the political...

COP27 summit agrees to help climate victims. But it does nothing to stop fossil fuels
CNN (Online News)

The world has failed to reach an agreement to phase out fossil fuels after marathon UN climate talks were “stonewalled” by a number of oil-producing nations.

Negotiators from nearly 200 countries at the COP27 UN climate summit in Egypt took the historic step of agreeing to set up a “loss and damage” fund meant to help vulnerable countries cope with climate disasters and agreed the globe needs to cut greenhouse gas emissions nearly in half by 2030.

The agreement also reaffirmed the goal of keeping global warming to 1.5 degrees Celsius above pre-industrial...