Senate Judiciary Committee Chairman Chuck Grassley has referred Michael Avenatti and Julie Swetnick to the Justice Department for a criminal probe for allegedly making false statements about Justice Brett Kavanaugh during his confirmation process. Supporters of the move have questioned the veracity of Swetnick's claims, which implicated Kavanaugh in gang rapes while in high school, while some others have criticized Grassley for not scrutinizing Kavanaugh's sworn statements about his drinking habits. 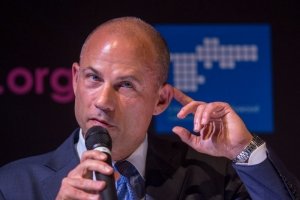 Senate Judiciary Committee Chairman Chuck Grassley (R., Iowa) on Thursday referred attorney Michael Avenatti and one of his clients to the Justice Department for criminal investigation for

No justice seemed prepared to let 538 obscure party loyalists choose the next president. The Supreme Court indicated on Wednesday that it probably won’t...

The Supreme Court heard oral arguments on Tuesday, via teleconference, about the power to investigate the president. President Donald Trump has objected to...

The Supreme Court’s View of Politics Is Unbearably Bleak
OPINION

In overturning the criminal convictions that resulted from the Bridgegate scandal, the Court is essentially accepting that political corruption is here to stay...

Our Lady of Guadalupe School v. Morrissey-Berru and St. James School v. Biel, are difficult cases, which the Court will hear in a rare teleconferenced oral...

Just months before Election Day, the question of whether President Trump will get to select a third Supreme Court justice hangs over the final weeks of the...

U.S. Supreme Court justices on Wednesday grilled a lawyer advocating that “electors” in the complex Electoral College system that decides the winner of U.S....

Decision, expected this summer, could have an impact on the 2020 presidential election. President Trump’s personal lawyers, backed by the Justice Department...

President Donald Trump's effort to keep his personal and corporate financial records away from congressional and law enforcement investigators comes before...

The Supreme Court temporarily denied a motion Wednesday from House Democrats to obtain grand-jury testimony and other documents from former Special Counsel...

A unanimous Supreme Court on Thursday struck down a ruling by the U.S. Court of Appeals for the 9th Circuit that had overturned the conviction of a woman...

Supreme Court Justice Ruth Bader Ginsburg on Tuesday was treated at John Hopkins hospital for a “benign gallbladder condition,” the court said in a statement.